What are the advantages and disadvantages of iPhone 3GS?

iPhone 3GS is the third generation of iPhone, The shape and dimensions are nearly identical to the previous version, The placement of the buttons, a 3.5-inch screen and a SIM card slot with iPhone 3G, 3GS screen look cleaner than iPhone 3G.

The new features of iPhone 3GS change especially in terms of speed, where the “S” in iPhone 3GS stands for Speed ​​(iPhone 3G Speed) in view of more robust internal processes to offer a faster experience, various software features were also introduced exclusively to iPhone 3GS.

iPhone 3GS is the same design as its predecessor which uses the glossy plastic look with pointy edges that let users more comfortable when using the phone, It is available in white and black for both models (16 GB and 32 GB) although the current 8 GB model is only available in black.

iPhone 3GS has a capacitive LCD touchscreen, Improvement over its predecessor’s screen include 24-bit color emulation ( 18-bit color display plus dithering ) for a more color-rich display and oleophobic coating to help reduce fingerprints on the screen, Capacitive touchscreen is designed for a bare finger, or multiple fingers for multi-touch sensing. 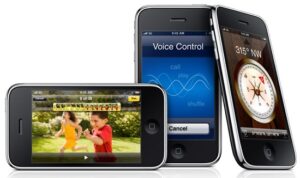 It has 3.2 megapixels autofocus camera with video recording, Improved camera ( except for low light performance)  with autofocus, macro, and white balance support, and a “tap to focus” feature, touch focus with subject tracking, And macro mode from as close as 10 cm, and it is capable of capturing video VGA.

As in the previous models, all data is stored in flash memory, not the SIM, and does not offer the option to expand storage, Initially available in 16 and 32 GB though the 8 GB model was later released.

Voice Control was introduced as an iPhone 3GS and a special feature allows the phone to control the phone and music with sound, iPhone 3Gs has better audio quality, It has louder loudspeaker results with performance gains primarily in music playback and purportedly better battery life.

iPhone 3Gs has Voice Control, speaker-independent, It can be used to call a phone number, play music by song /album/artist name, shuffle music, It has Built-in support for Nike+ jogging system and TV-out outputs 480p instead of 480i resolution, iPhone 3GS has full support for iOS 4, It is faster than the iPhone 3G.

VoiceOver, Color Inversion, and Text Zoom were introduced as exclusive features to iPhone 3GS, VoiceOver is a feature that dictates music details, system menus, text, and other things which were first introduced on the third-generation iPod shuffle, Color inversion reverses the color scheme of black and white to white-black, while Text Zoom allows the users to zoom the text on the screen.

iPhone 3GS has video recording support (VGA at 30 FPS, basic video editing, cut the beginning and end of a clip in-camera), It has a digital compass with automatic map orientation in the Maps app (particularly useful for orientation on Google Maps).

A magnetometer is also installed feature on iPhone 3GS which is used to measure the strength or direction of the magnetic field around the device, Certain devices or radio signals can interfere with the magnetometer requiring users to better stay away from the interference or re-adjust by moving the device in a figure 8 motion, iPhone 3GS also comes with an application-specific compass that points in the direction of the magnetic field.

The new iPhone 3GS lacks the same novelty factor as its predecessors, The lack of design changes is a turn-down, It has no video calls functionality, It has no FM radio, and it has no stereo speakers.

iPhone 3GS has a megapixel camera with limited feature, There’s still no flash or hardware shutter key for the camera, And despite the upgrade, The battery life is still generally poor.

iPhone 3GS has no video call camera, GPS without 3D mapping, The screen resolution remains 480×320 whereas its competitors have adopted a VGA resolution, It is without Bluetooth A2DP, So, You can not listen to music without wires, and there is no video camera in the front, So, It can not be a 3G video calling.

It has no support to edit Microsoft Word, Excel, or PowerPoint files (online editing forthcoming), It has lack of tactile feedback may bother some users, the battery life may be insufficient for heavy users, Some competitive mobile phones offer superior cameras and additional features, and larger capacity iPod models are available for less money per GB.