The importance of liver

The liver in our body is the second most important organ, It is located under our rib cage on the right side, It weighs about three pounds, It is shaped like a football that is flat on one side, and it performs many jobs in our body.

The liver performs the chemical reactions to remove the harmful toxins, It distributes and stores the essential nutrients, This vital process is called the metabolism and the cells in the liver are known as the hepatocytes, and they are put to work to keep your body working at its best.

What is liver cancer?

The liver filters the blood which circulates through the body, It converts the nutrients and the drugs absorbed from the digestive tract into ready-to-use chemicals, It performs important functions such as removing the toxins and other chemical waste products from the blood and readying them for the excretion.

Because all the blood in the body must pass through it, the liver is unusually accessible to the cancer cells traveling in the bloodstream, as the liver is made up of several different types of cells, Several types of tumors can form there.

The primary liver cancer that starts in the liver accounts for half of all cancers in the undeveloped countries due to the prevalence of hepatitis caused by the contagious viruses which predispose a person to the liver cancer.

Liver cancer is the abnormal (cancerous) growth of liver cells in the liver, Other liver cell types can become cancerous but the most popular liver cancer is hepatocellular cancer.

What causes the liver cancer? 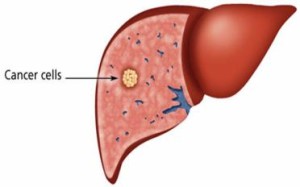 The people who get the liver cancer get it in the setting of the chronic liver disease (long-term liver damage called cirrhosis) that scars the liver and increases the risk for liver cancer, The conditions that cause the cirrhosis are the excessive alcohol use, the abuse, hepatitis B and hepatitis C.

The obesity and the diabetes are associated with the liver cancer, It is called nonalcoholic fatty liver disease (NAFLD) which may increase the danger of liver cancer especially in those who drink heavily or have viral hepatitis.

The symptoms may include the fatigue, the bloating, the pain on the right side of the upper abdomen or back and shoulder, the loss of appetite, the nausea , the feelings of fullness, the unplanned weight loss, the weakness, the fever, and jaundice (yellowing of the eyes and the skin), and there are light or white chalk-like stools.

The primary liver cancer is the condition which happens when the normal cells in the liver become abnormal in the appearance and the behavior, The cancer cells can become destructive to the adjacent normal tissues and they can spread both to other areas of the liver and to the organs outside of the liver.

The malignant or the cancerous cells which develop in the normal cells of the liver (the hepatocytes) are called the hepatocellular carcinoma, cancer which arises in the ducts of the liver is known as cholangiocarcinoma.

Metastatic cancer has the same name and the same type of cancer cells as original cancer, The most common cancers which spread to the liver are the breast, the colon, the bladder, the kidney, the ovary, the pancreas, the stomach, the uterus, the breast, and the lungs.

Steps to reduce the risk of liver cancer include

You should regularly see a doctor who specializes in liver disease, You have to Talk to your doctor about viral hepatitis prevention, including hepatitis A and hepatitis B vaccinations.