Through these assumptions he formulated the general gravitational law : 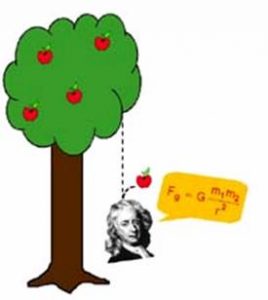 Where ( r ) is the distance between the centers of the two bodies and ( G ) is the general gravitational constant .

Gravitational constant is the mutual force between two bodies each of mass 1 kg and the distance between their centers is 1 m .

The gravitational attraction force obviously exists between the orbs , while it is unnoticeable between ordinary objects on the Earth like two persons stand beside each other or two adjacent cars .

That is because of the great masses of orbs compared to those of ordinary objects on the Earth where the gravitational force is directly proportional to the product of the attracted masses .

The astronomer Abu Al-Reihan Al Biruni succeeded to determine the perimeter of the Earth , Other Arab scientists like Ali Ben Eissa Osterlab and Ali Al-Buhtury had contribution in development of astronomy .

By applying the universal gravitational law :

The gravitational field intensity is determined by the relation :

Mass of planet : The gravitational field intensity is directly proportional to the mass of the planet , Slope =  g / M = G / r²