Force is an effect that attempts to change the object’s state from being static to motion or vice versa or attempts to change the direction of motion. The measuring unit of force is Newton (N). when a proper force acts on a static object, the object will move from its position to another position in the same direction of the force acting on it. when a proper force acts on a moving object in the same direction of its movement, the speed of the moving object will increase. 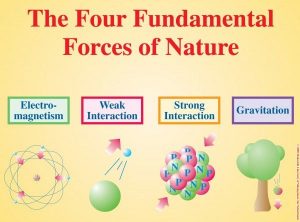 There are many different types of forces, these forces can’t be seen in nature but we can feel them in some phenomena such as wind motion, the gravitational of objects to Earth, the attraction of iron to the magnet, lightning & thunder. Also, there are forces causing technological applications, such as generating the electric current, fire weapons, nuclear explosions, and nuclear reactors.

When you put a set of objects that differ in mass (1 kg – 5 kg – 5 kg) on the ground and try to lift the masses and put them on a table beginning with the smallest mass then the next one in order, you will observe that the exerted work to lift objects increases by increases the object’s mass. So, As the object’s mass increases, the work done to lift the object upwards increases in the opposite direction of the Earth’s gravitational.

The value of Earth’s gravitational acceleration changes according to: Approach or move away from the centre of the Earth, and transfer from one place to another on the Earth’s surface.

When you coil the wire in a spiral shape around the plastic tube, insert the iron bar (or the iron nail) in the tube, connect the two ends of the wire to the battery, and approach the iron bar (inside the tube) to the iron filings.

The idea of the operation of a lot of devices depends on the electromagnetic forces, such as an electromagnet, electric generator (The dynamo) and electric motor.

Scientists have discovered that the atom stores a massive amount of energy inside its nucleus. This massive energy is accompanied by forces known as nuclear forces, which can be divided into two types:

The importance of nuclear force because it is used in medicine, industry and producing electricity.