Fingerprint scanner is a popular security barrier which can be found in all sorts of high-end devices that are currently on the market , It is fast & easy to use , It can be used as an alternative or a complement to those hard-to-remember passwords , It is used by the law enforcement to find the suspects but it is used to identify the good guys as well .

Fingerprint scanners are unique and highly secure ,  They  are used to lock/unlock the devices and apps without needing to remember the passwords , They are easier , cheaper and faster to setup , The online transactions become more convenient when you tap the screen with your finger for maybe a fraction of seconds .

Fingerprint Scanner offers very high accuracy , It is the most economical biometric PC user authentication technique , It is one of the most developed biometrics and small storage space required for the biometric template that reduces the size of the database memory required .

Fingerprint scanner scans & record the fingerprint , It is used to open the door or turn the device , It is limited by the quality of technology used in its construction , Many Laptops have been marketed with these devices on board to control the access to the machine by the hackers or the other criminals or simply as a privacy device . 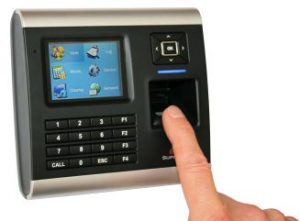 Benefits of the biometric finger scanner are obvious , It is quite easy to copy a key or write down an alarm code and pass it along to unauthorized persons , It is nearly impossible to duplicate another person’s fingerprint in a form that the scanner will recognize .

The other types of access control solutions have a weakness in that they depend on something that can easily be lost , shared or duplicated , Finger prints have none of those weaknesses ,  whomever has an approved finger print does not necessarily have access to any other part of the security system .

The hackers are experts at finding out passwords to your computer , They likely don’t have a useable copy of your fingerprint , Fingerprint Scanners present extra security , The human fingerprint contains unique whorls and ridges that would be difficult for the average crook to duplicate .

Fingerprint Scanners can scan many possible suspects or check identifications from remote locations , rather than requiring the individuals to come back to the station or take time processing ink fingerprint cards .

This unique fingerprint speeds up the secure transaction or the registration process compared to the complex series of verification of emails , passwords , encrypted data and more , The fingerprints are used with a combination of other tools such as iris cameras or voice recognition .

The fingerprint is an impression of the friction ridges of all or any part of the finger , Very little time is required for enrollment with the fingerprint scanning system , Fingerprints are unique identifier specific to the individual and most people are familiar with the use of fingerprint for the identification purposes .

Fingerprint scanners are circular and flat , They are very convenient with a swipe or press of your finger , The main benefit to this kind of security barrier is that the biometrics used belong to a person and can not be modified , except for in the case of surgery or accident , making them unique and impossible to recreate .

The biometric devices are important in business dealing with a lot of money to get access to the secret information about the clients or the company , These devices can be fixed at the entrance of the valued information , whether it is at the door entrance or on a laptop .

For the people who are affected with the diabetes , their eyes get affected which causes changes in the iris and the scanner gets unable to detect , You can’t misplace your fingerprints and it does not change with age or get affected by any disease .

The hackers can deceive and outsmart the fingerprint machines , such as finding the target’s fingerprints on another surface like a drinking glass and using these prints to access the device , or even cutting off someone’s finger for the print .

Portable fingerprint is easier to steal , While the fingerprint scanner at the home office may be large and bulky , a smaller one in the field may be easier and more damaging for someone to steal , The consequences of theft can involve more than just missing hardware , but improper access to the secure database .

As this technology is so sensitive , cheap components in its construction can result in an authorized person being denied access because of a bit of sweat on the finger or an inconveniently placed cut , If the workers are not allowed their approved access to part of the facility or the computer user is locked out of their machine , the results can be quite stressful .

As many as half of smartphone owners do not utilize a password to lock their hardware , This can present a considerable threat to endpoint data protection , as if the individual’s unlocked device is lost or stolen , The hackers have easy access to any sensitive content contained there .

While locking the smartphone with the fingerprint may serve to ward off these kinds of attacks , The security experts have showed that such protection measures can be hacked , The process is not an easy one & it requires the correct , clean fingerprint of the device owner which is copied with transparency film and used to unlock the phone .

If not performed correctly , the cyber-criminal may not be successful as the users only have a set number of attempts before they are asked to utilize a four-digit or patterned pass-code .

Injury , whether temporary or permanent , can interfere with the scanning process , There is nothing to suggest that the same technology that is used to store the fingerprint as statistical algorithm can not be used or modified to recreate accurate depiction of the print itself .

Fingerprint scanning crosses the fine line between the impersonal and non-intrusive nature of passwords and PIN , The passwords that can be saved on the computers & the devices that we use but the fingerprints can be stored everywhere and on everything , making them public domain .

High quality copies of fingerprints can be made by using different techniques , So , it is possible to create copies with the fingerprint to impersonate the user , Fingerprint scanners aren’t infallible , The optical scanners can’t distinguish between the picture of a finger & the finger itself and capacitive scanners can be fooled by a mold of a person’s finger .

If anyone can access to an authorized user’s prints , He can trick the scanner , The criminal can cut off somebody’s finger to get a scanner security system but some scanners have additional pulse and heat sensors to verify that the finger is alive , but these systems can be fooled by a gelatin print mold over a real finger .

Having a high security system may require expensive computer hardware and software , Certain fingerprint scanners can be quite expensive , Many employees are working with their hands , their fingers may get rough or scratched which could lead to a miss-reading .