2017 Honda Civic is expected to remain one of today’s best-selling compact cars , Its improved performance & roomy interior pushes it to the top of the class , While the sedan version is the solid choice for the families , Some drivers will prefer the sleek coupe & the hatchback version has been touted as the class leader .

2017 Honda Civic coupe & sedan models will be presented in multiple trim levels from LX to Touring , The manual transmission will come standard on the base models , while most trims feature CVT as standard , 2017 Honda Civic offers nimble comfortable handling , It comes with a superb array of standard & high-tech features at a reasonable price .

2017 Honda Civic is the year into its 10th generation , Although in the recent years the car wasn’t the most exciting vehicle in its segment , the redesigned model is much improved , The exterior moves away from safe , subdued styling in favor of an exterior that sparks interest , The interior offers up more passengers & cargo room , with rear passengers sitting more comfortably .

The engines deliver a powerful & efficient punch for the cars , The overall driving dynamics of the Civic are spirited , Honda Civic can offer well-controlled body motions & good performance , but the steering feel could be tighter , 2017 Honda Civic clamors to once again be one of the top contenders in the compact segment .

The drivers recognize that Honda Civic is a reliable & fuel-efficient compact car , The new Civic is more fun to drive than ever before , Its crisp handling & snappy acceleration should impress a lot of drivers , On the inside , the 2017 Honda Civic sedan offers enough room to accommodate everyone in your family . 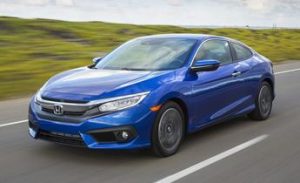 2017 honda civic Model offers optional manual transmission with turbo-four , It has stylish exterior , It comes with an abundant cargo space , It has quiet & upscale cabin , It offers roomy seats , It presents ample cargo space , It offers smooth ride & crisp handling and it offers excellent fuel economy for the class .

2017 Honda Civic fits the description of the fuel-efficient vehicle , The optional CVT automatic transmission helps you to obtain the maximum fuel savings , When equipped with the base four-cylinder engine , The Civic can return up to 40 mpg , The turbocharged model tops out at a solid 42 mpg and all versions of the Civic are designed to burn the regular unleaded gas .

2017 Honda Civic has strong Turbocharged Engine , The base four-cylinder engine is peppy but a lot of drivers will be lured by the optional turbocharged engine , It can deliver a stronger performance without giving up any fuel efficiency , It kicks out a lively 174 horsepower & 162 pound-feet of torque , When tested on the track , the turbocharged Civic has clocked a quick 0-60 time of 6.8 seconds .

The new model is a blast to drive unlike the previous generations of the Civic , Its brisk acceleration helps you to merge onto the interstate with an extra measure of confidence , You can take advantage of the Civic’s sharp handling , Its steering system offers a strong connection to the road , the Civic’s ride quality remains incredibly smooth .

2017 Honda Civic is an exciting Hatchback Model , There are many drivers who will fall in love with the all-new Civic Hatchback , It is stylish & It offers a ton of cargo space , From skate boards to camping gear , You can pack a lot of different items in the back , Like the rest of the Civic models , The hatchback version is equipped with many modern features .

The eco-friendly CVT will be a popular choice but a lot of driving enthusiasts will prefer the six-speed manual transmission , Over the years , Honda has perfected the art of designing manual transmissions , You will like the gear shifter’s preciseness , The clutch is very light , that helps prevent your foot from becoming fatigued in heavy traffic .

2017 Honda Civic Coupe is a superb alternative to a true sports car , The wide stance & sleek shape offers the Civic Coupe a mean-looking appearance , The Civic Coupe can’t match the performance of a high-powered sports car but the lightweight design helps it to get up to speed quickly , Meanwhile , the coupe’s firmer suspension promotes better handling .

Civic sedan will keep you happy if you hold the responsibility of hauling around your family on the everyday basis , In contrast to some compact sedans , the Civic offers ample legroom in its backseat , All of the seats are comfortable enough for long-distance traveling , Even tall drivers should easily fit behind the wheel .

Because a lot of the 2017 Honda Civic’s features carry over from the previous model year , It is expected that the new Civic will earn an IIHS Top Safety Pick + rating , as the sedan & coupe models earned this designation for 2016 , The safety features contain the ACE body structure , front , side and curtain airbags .

2017 Honda Civic is longer than the previous model , It boasts some of the best interior volume among compact cars , an interior enveloped in premium materials & top-notch plastics , The available navigation system runs through a large , easy-to-read screen , that serves as a control center for audio , Car-play & climate control .

The rear-seat legroom is impressive in the sedan , but beware of the wide sills when entering and exiting , At 15.1 cubic feet , the Civic sedan’s trunk is huge , Hatchback Civics boast 25.7 cubic feet of space with the rear seats up and some 20 additional cubic feet with them down .

You will prefer stepping up to at least an EX model , that contains the automatic transmission ( optional on LX models ) , remote engine start , moon-roof , 60/40-split folding rear seat and upgraded infotainment system with a 7-inch touch screen that is Apple Car-play and Android Auto compatible .

Every Civic models come equipped with the front-wheel-drive system , So , you will not be able to opt for the AWD setup , If you need extra traction in the winter , check out the new Subaru Impreza , It comes standard with all-wheel drive .

2017 Honda Civic contains a disappointing infotainment system , The Civic’s touch-screen infotainment system is not responsive , The users have complained about the system’s annoying volume controls & the process of integrating your smartphone is more complicated than usual .

2017 Honda Civic has light steering feel , It has no volume knob , The sloping roof makes it harder to get in & out of the rear seat for taller passengers , It comes with frustrating audio controls with touch screen , The Civic’s touch-screen audio controls aren’t as easy to use as conventional knobs & buttons .