Electric vehicles are more efficient than gas-powered vehicles , They are extremely safe & compact , They are quiet to drive , They are convenient & durable , They are fueled for very cheap prices and they can be a great way to save the money in your own life .

The electric car is a great way not only save the money but also help contribute towards a healthy and stable environment , The cars produce a lot of carbon emissions which are ejected into our natural atmosphere , leaving us vulnerable to the things like the pollution and greenhouse gases .

Many companies are manufacturing the hybrid vehicles to avoid the emergencies due to discharging of the battery , Hybrids cars run on the electricity as well as gasoline or diesel , So , You don’t have to worry about the distance you are going to travel and the charging points .

Electric vehicles get their power from rechargeable batteries installed inside the car , The batteries are not used to power the car only but they are used to operate the lights and the wipers . 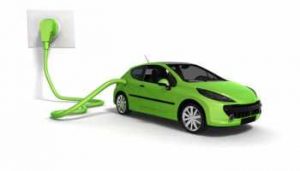 The electric car is a new concept in the world of the automotive industry , It is sporty and sleek , It is earth-friendly , The charging stations can be installed in your home , They will be available in parking garages and public locations .

Electric motor of the electric car has the size of a five-gallon water bottle , This motor is connected to the stock transmission , There are a number of batteries , each about the same size and shape as the traditional car’s battery .

The accelerator pedal is connected to a box which operates the electronic controller , When the driver presses the accelerator with ease , this action delivers the power needed , When the car runs faster , the pedal is pushed harder .

The electric car will be the normal mode of transportation in the coming future , It is a great way for you to save a lot of money on gas as a consumer , It is charged by the electricity you provide , So , you don’t need to buy any gas ever again .

When you drive fuel based cars ,They can burn a hole in your pocket as the prices of fuel have gone all time high , With the electric cars , this cost can be avoided , Though the electricity isn’t free , an electric car is far cheaper to run .

The electric cars are 100 percent Eco-friendly as they run on the electrically powered engines , They do not emit the toxic gases or smoke in the environment as they run on clean energy source , They are better than hybrid cars as hybrids run on gas produce the emissions and you will contribute to a healthy climate .

The environmental impact of the electric car is zero , So , you’re reducing your carbon footprint and positively affecting the economy , The great mass production of the batteries & available tax incentives have brought down the cost of electric cars , So , making it much more cost effective .

Electric cars need low maintenance , They run on the electrically powered engines , So , there is no need to lubricate the engines , The maintenance cost of these cars has come down , You don’t need to send it to service station as you do with the normal gasoline powered car .

Electric cars reduced noise pollution as they are much quieter , The electric motors can provide smooth drive with higher acceleration over longer distances , ,The electricity is readily available , the vehicle runs noiselessly , Many times you won’t know that the vehicle has just passed you .

There are no emissions from EVs making them environmental friendly , The electric car runs on an electric motor , While gasoline-operated cars pollute the air each time they are driven , Driving an electric car promotes clean air , With rising gas prices at the pump , You can purchase a vehicle that costs less to fuel .

Electric cars offer higher efficiency by as much as 400 to 600 percent over an internal combustion engine , There are no polluting byproducts because these cars get their power from the batteries , the wind or the sun , They offer three times as efficient as gas engines .

Electric cars have their limited range , some need to re-fuel after only 100 miles , The time they take to recharge the battery or re-fuel can take over an hour , They are expensive to buy , some costing $50,000 as the manufacturer can not fully recover the cost of the discarded and new parts .

If you want to convert your current vehicle to an electric one , the cost of conversion is between $5,000 and $7,500 , This is due to the cost of components and batteries , The initial payment for EVs or hybrids is much more expensive than a gas-powered car .

The amount of time it takes to charge your battery depends on the charger and power available , Most EV owners charge overnight , If the EV has an on board charger , it can be charged during the day while you are at work , On board chargers weigh between ten and thirty pounds , They plug into either a 110V AC or 220V AC .

Most electric cars charge at 220V AC will reach 80 percent of the charging levels between one and three hours , The battery has to be recharged regularly , It takes about 6-8 hours to recharge completely , When you are traveling a long distance , you may be at the risk of the battery running out .

A lot of drivers should install a charging station at home , cutting into the cost savings from owning an EV in the first place , The electric cars are more expensive to buy than their equivalent petrol vehicle , although this amount could be saved by using an electric car in a few years or less .

Electric vehicle ownership doesn’t eliminate the fuel costs entirely , As the electricity isn’t free and charging during peak hours can add to your utility bills , Still , many drivers won’t see costs increase more than $20 per month , at most .

The electric cars can not cruise , accelerate or climb fast enough to compete with gasoline-powered cars and the accessories such as the air conditioning and radios drain the battery even further .

Because the electric cars are created by replacing the fuel tank and gasoline engine of a conventional car with the electric motors , the batteries , the chargers and the controllers , So , The car is heavier and less efficient than the car solely running on the electricity .