Galvanic cells are divided according to their nature to produce electrical energy to primary cells & secondary cells, Where all of them are systems which produce electrical energy through a spontaneous oxidation-reduction reaction, Fuel cell is a primary cell which used in production of electricity without consuming its components, Fuel cell is used in spaceships & space launching rockets.

They are galvanic cells which convert the stored chemical energy to electric energy through a spontaneous irreversible (oxidation-reduction) reaction, Primary cell is an irreversible cell because it is not only easy but also impossible to be recharged to return its constituents to its initial state, Primary cells stop to work when the anode material is consumed and the ions of the cathode half-cell are diminished.

They are saving energy systems in the form of chemical energy which can be converted to electrical energy at the desired time, this type of cells can’t be recharged because their chemicals are consumed, It is impossible to be recharged such as dry cell and mercury cell.

The primary cells are easy to be used particularly in the mobile equipment, They are known as dry cells because primary cells should in a dry form not in liquid, Primary cells realize a constant potential for a long time working, the possibility of its manufacture in small cells.

Secondary cells are galvanic cells which convert the stored chemical energy to electric energy through a spontaneous reversible (oxidation-reduction) reaction and can be recharged by passing an electric current from an external source between their poles in an opposite direction to the discharge process, such as Alkaline nickel-cadmium battery, Lead-Acid battery & Lithium-ion battery.

This cell is manufactured in the shape of the cylinder or disk, It is characterized by its small volume and firmly closed, It is used in earphones, clocks & cameras due to its small volume, The mercury cell is a primary cell because the oxidation-reduction reaction is spontaneous and it takes place by an irreversible form, We should get rid of the mercury cell by a safe way after using it because it contains mercury which is a poisonous material.

The electrolyte is potassium hydroxide (KOH), The isolator is made of a thin porous layer of plastic separate between anode and cathode but it allows the ions to pass. 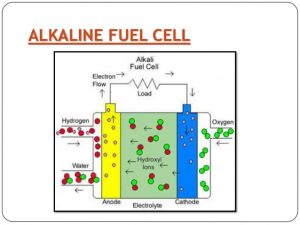 Fuel cell is a primary electrochemical cell in which the chemical energy is converted to electrical energy by using fuel, so, it can’t be consumed and doesn’t store the energy, This cell is manufactured to control the energy produced from hydrogen burning (reaction with oxygen) and it is characterized to be used in fuel engine of the spaceships and launching rockets.

It is made from two electrodes (anode and cathode), each of them is similar to hollow container lined by a layer of porous carbon that connects between the internal room and the electrolyte (KOH), Fuel is the mixture of hydrogen & oxygen from an external source, The electrolyte is Hydrated potassium hydroxide solution (KOH).

This battery doesn’t store the energy produced like other batteries because it requires a continuous supply with fuel and continuous remove of product, The fuel cell plays an important role in rockets because its gaseous fuel (the mixture of hydrogen and oxygen) is the same fuel used in launching rockets.

Advantages: It can’t be consumed like the other galvanic cells because it supplied with fuel from an external source, a Fuel cell operates at high temperature and the produced water evaporates and it can be condensed to be reused as drinkable water for astronauts.

Disadvantages: It doesn’t store the energy because it requires a continuous supply with the fuel and a continuous remove of the products.