At the beginning of the nineteenth century Berzelius was the first scientist who classified elements into two main group ( metals and nonmetals ) , according to their physical properties , Indeed that was before knowing anything about atomic structure , This is an old classification which is still currently in use , although there are no boundaries between them and their properties in the periodic table .

With the development of our concept about the electron structure of atoms , we can differentiate between metals and nonmetals , Additionally , there is a third group of elements known as metalloids .

Their valence shell – generally – has less than half its capacity of electrons , They have large atomic radius which leads to small values for ionization energy and electron affinity .

They are electropositive elements , due to their tendency to lose electrons of the valence shell and change into positive ions to reach the structure of the nearest noble gas .

They are good electric conductors , due to the mobility of their few valence electrons , which can transfer from one position to another in the metal structure . 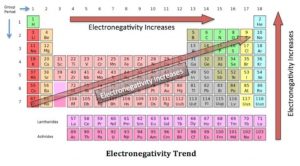 Their valence shell – generally – has more than half its capacity of electrons , They have small atomic radius which leads to high values for ionization energy and electron affinity .

They have small atomic radius which leads to high values for ionization energy and electron affinity , They are electronegative elements , due to their tendency to gain electrons to form negative ions that have the same electron structure of the nearest noble gas .

The metalloids are characterized by the following properties :

The graduation of metallic and nonmetallic property in the periodic table :

In the same group : The metallic character increases ( The nonmetallic character decreases ) with the increase in the atomic number as we go down the group , due to their large atomic radius and the low ionization potential and electron affinity .

Consequently : Cesium is considered the most active metal , because the metallic property increases at the same group by increasing the atomic number and it is placed at the bottom of the left hand side the table ( the lowest metal in ionization potential ) .

Fluorine is considered the most active nonmetal , because the nonmetallic property decreases at the same group by increasing the atomic number and it is placed at the top of the right side of the table ( the most electronegative nonmetal ) .

When an element combines with oxygen forming a compound known as oxide , There are types of element oxides which are Acidic oxides , Basic oxides and Amphoteric oxides .

The nonmetallic oxides are named by acidic oxides , because :

They react with alkalis forming salt and water .

From the acidic oxides , Carbon dioxide CO2 , Sulphur trioxide SO3 , Nitrogen dioxide NO2 .

They react with acids forming salt and water :

Amphoteric oxides are element oxides that react with acids as basic oxides and react with bases as acidic oxides forming in both cases salt and water .

The graduation of acidic and basic property in the periodic table :

In the period : The basic property of the oxide decreases as the atomic number of the element increases , while the acidic property increases .

In the group which starts by a nonmetal , The acidic property of the oxide increases as the atomic number increases as in group 7A .