Secondary Cells are characterized by reversible chemical reactions, These cells can be recharged by passing an electric current from external source between their poles in a direction opposite to the discharge process, Secondary Cells such as Lead-Acid battery and Lithium-ion battery, Lead storage cell is used as a galvanic cell and electrolytic cell.

Lead-acid battery is from the secondary galvanic cells, It is known as a Car battery (liquid battery) because this kind of batteries is developed and becomes the most suitable kind of batteries used in cars, It consists of six cells are connected in series, Each cell produces Ecell = 2 volt and the total cell potential of the battery is emf = 2 × 6 = 12 volts, This battery works as a galvanic cell during operation (discharging) while in case of recharging it is considered as an electrolytic cell.

The cathode is a network of lead filled with a paste of lead dioxide (PbO2).

Calculate the electromotive force for this cell

Using the battery for long period leads to decrease the concentration of sulphuric acid as a result of increasing the quantity of water produced from the reaction and also leads to the conversion of cathode material (PbO2) and anode (Pb) to lead (II) sulphate which lead to decrease of the quality of electric current produced from it.

Car battery is reversible cell, The battery needs to be recharged and this done by connecting the battery poles to an outside source of direct electric current whose potential is slightly higher than the potential produced from the battery, this will lead to reversing of the spontaneous reaction which occurred during the discharge of the battery and leads to conversion of lead sulphate (PbSO4) to lead (Pb) at the anode and lead dioxide (PbO2) at the cathode and the concentration of the acid renewed as it was.

The lead-acid battery is working during charging as an electrolytic cell, The secondary cells are considered as strong batteries, The car dynamo in a continuous way is used in recharging the battery first by first, where a nonspontaneous chemical reaction has occurred by passing electric current, this means the storage of electric energy which comes from the external source in the form of chemical energy.

The Dynamo of the car is used in recharging the battery once when it is discharged, The lead-acid battery is considered as a reversible cell because when it is connected to outside source of direct electric current whose potential is slightly higher than the potential produced from the battery, oxidation reactions are converted into reduction reactions and vice versa.

The total cell potential of the car battery is 12 Volts, although the potential of lead-acid is 2 Volts because the car battery consists of 6 cells of 2 volts per each, which are connected in series, The container of the lead-acid battery made from solid rubber or plastic because it is not affected by acids like sulphuric acid.

The lead-acid battery needs recharging because the long period for using the battery leads to the dilution of sulphuric acid concentration, The continuous use of the battery for longtime decreases the electric current produced because H2O amount increases which decrease the concentration of H2SO4, so, the acid becomes weak, Pb, PbO2 are consumed, PbSO4 is formed and the density of the acid decreased (less than 1.2 gm/cm³).

Mercury cell is alkaline, while the lead-acid battery is acidic because the electrolyte used in mercury cell is potassium hydroxide, while the electrolyte used in the lead-acid battery is dilute sulphuric acid, The recharging reaction is non-spontaneous reaction and needs an outside electric source, so, the cell here is an electrolytic cell where the electric energy is used to produce a chemical reaction, it is known as secondary cell, In the car, the dynamo in a continuous way is used in recharging the battery first by first.

The density of the sulphuric acid in the battery can identify the car battery condition because the density of acid in the completely charged battery ranges between 1.28 to 1.30 g/cm³, If the acid density decreased to lower than 1.2 g/cm³, this means that the battery needs to be recharged and increase its acid concentration. 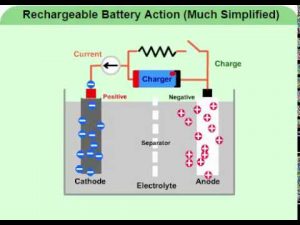 Lithium battery is a secondary cell, It is a dry and rechargeable battery used in mobiles, laptop, the modern cars instead of the lead acid battery, it is lighter and stores a large amount of energy while it is small in size, Lithium is used in structure of lithium-ion battery because it has the lowest reduction potential (−3.04 volt) and it is the lightest metal (structure).

It is the lightest metal (lighter than Pb), Its ions have a small size, It has high storage capacity, It can be recharged several times and can be used for many years, The metallic cover of the battery contains three thin layers rolled in a spiral shape, these layers are cathode and anode which are separated by an isolator and dipped in the anhydrous electrolytic solution.

Electrolyte is Lithium hexafluoride phosphate LiPF6, it is a nonpolar solvent, so, it doesn’t reduce the Li+, It is a nontoxic substance and it has high thermal stability, The isolator is made of a very thin porous layer of plastic separate between anode and cathode but it allows the ions to pass through it, Electromotive force = 3 V.

Lithium is used in the manufacture of batteries because it has the lowest reduction potential of all the metals and the highest metal, The lithium ion battery is prefered than the lead-acid battery because no gases evolve from it, the life time of this battery is long, it can be recharged and used for several years.