Mole is the unit of the quality of matter in the International System of Units ( SI ) and it is defined by different ways according to the mole and mass of substance , the mole and Avogadro’s number and the mole and volume of gas .

The molecule and the atom are very small particles, their dimensions are expressed in the Nano-meter unit and it is very difficult to deal with them practically.

The first scientist who named the mole was the scientist , Wilhelm Ostwald , in 1894 and was originated from the German word mole , It is derived from the word Molecule . 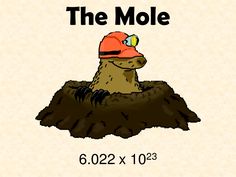 The mole and mass of substance

The mole is the atomic mass , molecular mass or mass of formula unit expressed in grams , Any substance may be found in the form of atoms , molecules or formula units , We can not say a molecule of ionic compound , but it is called formula unit .

The mass of one atom is called atomic mass which is very small , It differs from one atom to another one which is estimated by atomic mass unit ( amu ) or u , The molar mass of different elements are different because they have different atomic masses .

There are some elements have different molecular formulas depending on their physical state , So , The mass of one mole will differ from one state to the other .

The ionic compounds are found in the form of crystal lattice , as the ion is surrounded from all directions with the ions of an opposite charge , The ionic compounds can be expressed by the Formula unit , which shows the ratio between the ions forming it .

The mole and Avogadro’s number

The Italian scientist Amedeo Avogadro reached the result that the mole of any substance contains a constant number of ( atoms , molecules , formula units or ions ) , this number equals 6.022140857 × 1023  and  it is called Avogadro’s number .

Avogadro’s number is the number of the atoms , the molecules , formula units or ions which are found in one mole of substance and it equals 6.02 × 1023 ( atom , molecule or ion ) .

The mole is the amount of a substance that contains Avogadro’s number of particles ( molecular , atoms , ions or formula units ) .

The number of moles

Limiting reactant of Chemical Reaction , Mole and volume of gases