Limiting reactant of Chemical Reaction , Mole and volume of gases

Every chemical reaction needs accurately calculated amounts of reactants to obtain the required amounts of products, If the amount of one of the reactants increases than required, this extra amount remains as it is, without participation in the reaction, The other reactant is completely consumed and determines the quantities of products formed and it is known as the limiting reactant.

Limiting reactant is the reactant which is completely consumed during the chemical reaction and reacts with other reactants to produce the lowest number of moles of the product .

The mole and volume of gases

The solid or liquid matter has a definite and constant volume , It can be measured by various methods , On the other hand , the volume of gases changes according to gases of the container .

Gas volume is directly proportional to the number of its moles when the temperature and pressure are constant .

The equal volumes of different gases contain the equal number of molecules , at the same standard temperature and pressure ( STP ) . 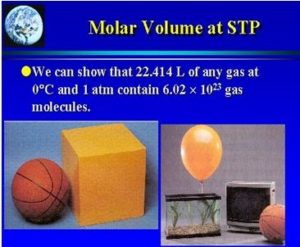 The properties of the noble ( inert ) gases