The oxygenated acids ( acids contain oxygen ) and bases are considered as hydroxy compounds , They can be represented by the general formula ( MOH ) , where M is the element atom , The hydroxy compounds can be ionized by either ways : As an acid , As a base . 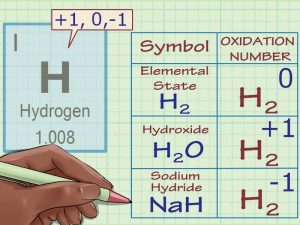 Sodium hydroxide is ionized as a base , where sodium atom has a big volume and its ion has only one positive charge , Accordingly the attraction between Na+ and O− − decreases , The ( O − H ) bond is stronger than that of the ( Na − O ) bond , So , OH− ion is produced .

The strength of the oxygenated acids

The oxygenated acids are represented by the following general formula : M On ( OH ) m

The strength of the oxygenated acid increases as the number of nonbonded oxygen atoms ( On ) with hydrogen increases .

Summary of the elements graduation in the periodic table

Trends and periodicity of properties in the periodic table :

Increasing the atomic number ( horizontal ) → in the periodic table  :

Increasing the atomic number ( vertical ) , downwards ↓ in the periodic table :

Oxidation number is a number that refers to the electric charge ( positive or negative ) that the atom or ion would have in the compound , whether it is an ionic or a covalent compound .

The advantage of using oxidation numbers is that they can help us in determining the type of chemical change occurring to an element during the chemical reaction .

The significance of oxidation numbers :

The significance of oxidation numbers differs in ionic compounds from that of the covalent compounds .

Rules for calculating the oxidation numbers

Write the oxidation number for each known element above its atom symbol in the compound molecule or atomic group formula .

Multiply the oxidation number of each element by the number of its atoms in the molecule .

You already know the concepts of the oxidation and reduction , which are :

In the chemical reaction :

So , we can determine the changes happen to the elements during the oxidation-reduction reactions through the change in their oxidation no. before and after the reaction , where : the oxidizing agent is reduced , The reducing agent is oxidized .