Holography is the science of making the holograms , It is a form of photography which allows the image to be recorded in three dimensions , The technique of holography can be used to optically store , retrieve & process the information , The hologram is the photographic recording of the light field , rather than of the image formed by the lens .

Holography requires the use of the laser light for illuminating the subject & for viewing the finished hologram , The hologram is used to display a fully three-dimensional image of the holographed subject , that is seen without the aid of special glasses or the other intermediate optics .

The hologram is not an image , It is unintelligible when viewed under diffuse ambient light , It is an encoding of light field as an interference pattern of random variations in the opacity , density or the surface profile of the photographic medium .

If suitably lit , The interference pattern can diffract the light into the reproduction of the original light field & the objects that were in it appear to be there , exhibiting visual depth cues such as parallax & perspective which change realistically with any change in the relative position of the observer . 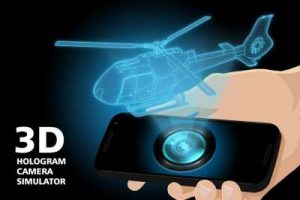 Holography is distinct from lenticular & the other earlier autostereoscopic 3D display technologies , that can produce superficially similar results but are based on conventional lens imaging , Stage illusions such as Pepper’s Ghost and the other unusual , baffling , or seemingly magical images are incorrectly called the holograms .

Holography was developed by D. Gabor in 1947 , He recognized that when a suitable coherent reference wave is present simultaneously with the light scattered from the 3D object , then the information about the amplitude & phase of the scattered waves can be recorded .

In spite of the fact that recording media responds only to the light intensity , He demonstrated that , from such the recorded interference pattern , which he called the hologram , So , the total recording , an image of the original 3D object can ultimately be obtained.

Although , recording the hologram of the real object requires some wave interference between two laser beams with a high degree of coherence between them in a dark room , So , this system must be kept very stable since a very slight movement can destroy the interference fringes , in which both intensity and phase information of the 3D object are contained .

Compared to the conventional holographic approaches , CGH does not rely on the availability of specialized holographic recording materials and it can synthesize the optical wave-fronts without having to record the physical manifestation of them , and it offers unprecedented wave-front control by making it easy to store , manipulate , transmit & replicate the holographic data .

Although CGH-based display systems can be built today , their high cost makes them impractical for many applications , However , as the computer & optical hardware costs decrease , CGH displays will become a viable alternative in the near future .

Holograms can be entirely computer-generated to show the objects or the scenes that never existed , Holography are used in many aspects of industrial nondestructive testing , ultrasonic holography , holographic microscopy , holographic memory , holographic film and television .

It would be very difficult for the people to get the equipments & technical details for the hologram stickers large volume production , Today , Purchasing & getting for this traditional equipment has become very easy but the manufacturers for these equipments try their best to enhance the quality & security level of their products that can help them to avoid the adverse copying .

When the people have a closer look at these hologram stickers , The holographic printing find that the holographic products such as the stickers & the labels are very different from the traditional trademark on the commodities , The forged tools such as the cameras & the printers which the forger uses have no effect for holographic copying .

Holography not only records the reflective intensity on the object , but also the phase information is recorded , So , even if the hologram picture is left with only a small part , It still can reproduce all the scenery , It will be very convenient for the museums , the libraries & the other collections of pictures .

You can have holographic imaging technology without wearing special polarized glasses , not only to the audience to bring the convenience , but it reduces the cost of traditional 3D display , The real-time electronic holographic ( holovideo) display can create a truly 3-D computer graphics image with all of the depth cues ( motion parallax , ocular accommodation , occlusion , etc. ) & resolution sufficient to offer the extreme realism .

Holovideo displays promise to enhance numerous applications in the creation and manipulation of the information , including telepresence , education , medical imaging , interactive design and scientific visualization .

Electro holographic display generates a 3-D holographic image from a 3- D description of a scene , This process involves many steps , grouped into two main processes which are Computer graphics and Fringe computation .

Computer graphics : by using a camera , a sequence of images is generated , Fringe computation : 3-D description scene is converted into the holographic fringe using interference or diffraction approach , Optical modulation , where the light is modulated by the fringe using SLM and optical lens.

The holographic technology can supply high-quality images & accurate depth cues viewed by the human eyes without any special observation devices , So , Holographic 3D display is one of the attractive approaches for creating the most authentic illusion for observing volumetric 3D objects .

The alignment & packaging of the optical lens and the spatial light modulator is a great problem that can be removed using Infosys MHOE Technology , Micro holographic optical elements (MHOEs) are used for displaying the holographic three dimensional image of the object (e.g., received by the device in the form of a computer generated hologram via a communication network ) .

The system must be kept very stable since even a very slight movement can destroy the interference fringes , in which both intensity & phase information of the 3D object are contained , The device will be heavy and will have alignment and packaging issues .

Computer generated holography (e.g., using computer generated holograms) can be used to convert 3D information to 2D for sending and receiving using existing communication networks , High cost makes them impractical for many applications , There are packaging & alignment issues , It is difficult to be implemented in smaller displays .