In 1960, the American scientist Maiman build the first laser using crystal of chromium – doped Ruby, Later (He – Ne) laser was manufactured along with other types of lasers, The word laser is an acronym for Light Amplification by Stimulated Emission of Radiation which means the amplification of light intensity by stimulated emission which is the scientific base of laser working. 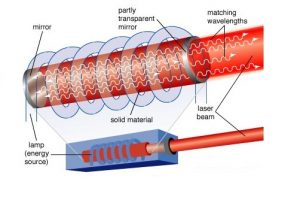 The excited atom loses its excitation energy after a very short period of time called lifetime (nearly 10−8 s) and returns back to its ground state by one of two methods:

Excitation of the atom is the process in which the atom absorbs a photon and moves from its ground state to one of the excited levels, Lifetime is the period of time in which the atom loses its excitation energy and returns back to its normal state.

It happens when the excited atom relaxes from the excited state to a lower energy state after elapsing its lifetime (about  10−8 s), the atom emits spontaneously without external stimulus a photon its energy equals the difference between the energies of the two states.

Spontaneous emission: Emission of radiation from the excited atom when it relaxes from the excitation level to a lower energy level spontaneously after elapsing its lifetime without any external stimulus, Examples: sources of ordinary light.

Properties of the emitted photons:

It happens, When the excited atom relaxes from the excited state to a lower energy state before the end of its lifetime due to falling of a photon its energy equals the difference between the energies of the two states, the atom is stimulated to emit a photon in phase with the incident photon.

Stimulated emission: Emission of radiation from the excited atom due to falling of an external photon having the same energy as the photon that excited it and stimulates the atom to emit two coherent photons (in phase, having the same direction and frequency) before its lifetime elapses, Examples: Sources of laser.

Properties of the emitted photons:

Inverse square law: The light intensity falling on a surface is inversely proportional to square the distance between the surface and the light source.

Although the emission of two photons by the effect of a photon in the stimulated emission process which is not inviolation to the law of conservation of energy, because one of the two photons is the incident photon and the other is resulted from returning back of the electron from the higher energy level to lower energy level.

The emitted photons have a wide range of wavelengths (Each line in the visible spectrum includes a band of wavelengths, that is why the ordinary colour appears to have different shades to the naked eye), The light intensity varies from one wavelength to another, Photons of ordinary light are incoherent both in time & place, They emanate at different instants of time , They have inconsistent and varying phase.

Intensity obeys the inverse square law where the intensity of radiation falling on unit area decreases by increasing the distance between the surface and the source as the photons are propagating incoherently, The diameter of the light beam increases during spreading due to dispersion.

The emitted photons have a very narrow bandwidth (it emits one spectral line with a very limited bandwidth), The intensity is concentrated at the wavelength of that spectral line, hence it is called monochromatic.

Photons of lasers are coherent both in time and place, They emanate from the laser at the same instant of time, They maintain the same phase difference during propagation over long distances, This makes radiation intense and focused.

Intensity does not obey the inverse square law where the intensity of radiation falling on a surface is constant even if the distance between the surface and the laser is increased due to the coherency of the photons, thus rays are more intense, concentrated and propagate for far distances without dispersion.

The diameter of the beam remains constant for long distances during spreading where the laser beam propagates in the form of parallel rays that do not suffer scattering and thus energy can be transmitted without much losses.

The importance and uses of the lasers in the industry