e security metal detectors are used to ensure the safety & security in the  airport , the college , the office building or any other areas , There are different types and models of digital walk-through metal detectors , but the most commonly used detectors are the hand held models and walk through models .

The metal detector uses the principles of the electromagnetic induction , the detection of the possible dangerous metallic object is notified with the alarm , It is more convenient and efficient in terms of functionality and application , So , the walk through and the handheld metal detector will give you the best security . 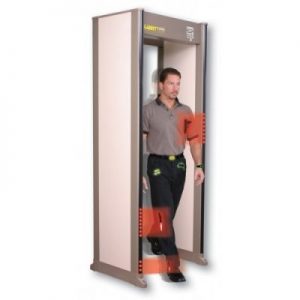 The hand held metal detectors are more affordable & they are still able to identify metallic objects that are considered to be dangerous , while walk though models are more convenient and more efficient .

With the help of the hand held detector , The security personnel can physically detect if the person is carrying the metallic object , while walk through metal detectors are much quicker and they alert the security personnel of dangerous objects such as the knives or the weapons .

We can feel safety in the airport , the college , the office building or any other area where these detectors are being used , The people that are using them can control who enters a specific area and what he brings inside it .

Metal detectors can deter potential criminals because the criminal will think twice before walking through a security check point , They offer alarm indication , The signal warns of the detection metal object , The indication can be visual and/or auditory and the alarm indication is off until a metal object is detected .

The alarm indication is proportional to the size , proximity , orientation and material of an object , The device used to generate the alarm indication can be a light bulb , lamp , light emitting diode , etc , Generating device can be a horn , siren , buzzer or similar item for the auditory indication.

The main drawback in using the metal detectors is the privacy concern , Many individual finds it uncomfortable to undergo thorough physical examination of their bodies for potential metallic objects .

The people are concern about the radiation which is emitted and released by the security metal detectors that might probably cause danger to their health and their person .

The metal detector creates the electromagnetic fields that can cause the electrical interference to the electronic devices , So , it may harm the pacemakers and it can be fatal for those people , So , it is advised that they avoid passing through them .

The metal detectors can give a false alarm if the people are wearing some kind of jewelry , watch , phone , loose change or similar , So , some people can feel embarrassed and it can cause panic for no reason , The false alarm caused by the detectors can be inconvenient both for the security personnel and the person to whom the alarm turned on .