Toyota Prius has been ranked as one of the most popular & fuel-efficient hybrid options , The buyers can choose between two batteries and this has an impact on the price point , The interior and cargo area has been retooled to provide more useful space .

Toyota vehicles have high quality & they have a great value , Toyota is a sturdy and family-appropriate car , It is considered one of the leading brands in retaining resale value , You can expect to get a nice trade-in price years down the road when it’s time to buy your next car .

2016 Toyota Prius is a superb choice for anyone who is looking for a reliable hybrid , It has a more traditional driving experience than previous models , It is boosted by performance & styling updates , This hybrid presents a smoother , quieter ride which is no longer plagued by a loud , labored sounding acceleration .

The base model offers an impressive 50 MPG during city driving that makes the Prius a solid choice for the people who are looking for a fuel-efficient vehicle , Although the back-end styling leaves much to be desired , the other interior and exterior revisions are all nice additions . 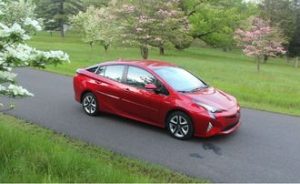 Toyota Prius is one of the most popular eco-friendly vehicles on the market today , The drivers can expect over 45 miles per gallon from this remarkable hybrid , It received high crash test safety ratings from the NHTSA , making it safe as well as an environmentally conscious choice for you & your family .

If we are looking for the hybrid to improve our fuel efficiency , 2016 Toyota Prius is a wise choice , Basic model boasts 50 MPG for city driving , The drivers who opt for 2016 Prius Two Eco can expect up to 58 MPG on the highway .

The interior of the vehicle has wonderful improvements over the last year’s model , It only makes noise while it uses gas to recharge the batteries and it doesn’t require much maintenance  ,  just a synthetic oil change every 10,000 miles .

The front seat cushions have more bolstering & they have a better shape , Soft-touch materials are more prevalent , The improved dashboard helps complete this year’s notable boost in interior comfort and quality .

Insurance Institute for Highway Safety gave 2016 Toyota Prius models an average rating of Good that is the top score available , Each of these cars comes with eight airbags and the consumers can upgrade the Safety Sense system in select models .

The hybrid cars comes with a lack of cargo space , while 2016 Toyota Prius does not have this issue , Prius increased cargo space that rivals all hatchback models , including standard fuel options .

The consumers can choose between six different trims , and each has its own unique styling features , These trims come in three categories which are Two , Three and Four , 2016 Toyota Prius Two is the base model and it has 15″ wheel covers .

2016 Toyota Prius comes with several notable exterior alterations , It is slightly longer , wider and lower than last year , The visual height is reduced with a nice accent line which goes across the doors , The unit that houses the front LED lights has become smaller .

The visual design of the rear light units leaves much to be desired , The spoiler is still a polarizing addition to Prius , Back-end design is not aesthetically pleasing , Front and sides of this year’s Prius offer a nice improvement over the 2015 model , but the back-end is the vehicle’s least attractive feature .

Prius Two does not come with the most exciting features , Base model contain many features which make it worthwhile , but budget shoppers do not have the option to upgrade the Two to include the new battery , alloy wheels and the add-on packages .

Monthly payments will be higher when you buy a new Toyota , Over time , you can expect to have repair costs , Toyota seems to run through good tires every two years now and it would be expensive to replace .