Hybrid cars emit less pollution than gas-only vehicles , They have a standard gasoline powered engine as well as an electric motor which gets its juice from the rechargeable battery pack , The idea is to create an environmentally friendly vehicle with better gas mileage & lower emissions .

Hybrid cars become popular and more common , They got their name because they utilize two engine technologies together , the electric motor and the conventional engine ( either petrol or diesel) , The electric engine powers the car at lower speeds and gas engine powers it at higher speeds .

The hybrid cars conserve fuel & They produce less CO2 emissions too , They are the most gasoline efficient of all cars , they typically get 48 to 60 mpg ,  There are cars that use the hybrid technologies with propane and natural gas as well . 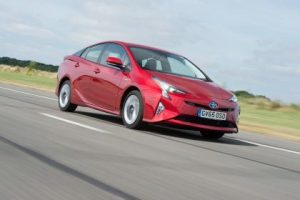 Hybrid car is defined as a vehicle which has an engine that can switch between the fossil fuel & alternate fuel source , It runs on the combination of gas and electricity , The gasoline engines used in the hybrid cars are small , light and highly efficient .

Hybrid cars are environmentally friendlier than conventional gas engine cars and have lower emissions , We can get 8 year warranties on the hybrid system , If we buy a plug-in hybrid and tax deductions/credits may be available .

If many people drive the hybrids responsibly , our oil consumption will drop , leading to lower gas prices , We will see a maximum gas savings , if we mostly drive in stop and go city traffic at slower average speeds .

Hybrid vehicles achieve the biggest gas mileage gain over the standard car when you are doing city driving where you can get 50% – 70% better gas mileage , We should check the specific model which we are looking at to determine how much you will save .

Hybrid cars have financial benefits , They are supported by many credits and incentives which help to make them affordable , Lower annual tax bills and exemption from congestion charges and less amount of money spent on the fuel .

Hybrid car offers regenerative braking system , Each time we apply the brake while driving , the hybrid car helps us to recharge our battery a little , On average the hybrid car consumes only half fuel of the same car without the electric motor .

Many hybrid cars are constructed using lightweight materials , so , they don’t consume as much energy as their full-weight counterparts  , With their superb efficiency ,  The engine is smaller and lighter which also saves much energy .

Hybrid cars offer higher resale value , With continuous increase in the price of gasoline , More people are turning towards Hybrid vehicles , So , These green vehicles have started commanding higher than average resale values , So , in case we are not satisfied with our vehicles , We can sell them at a premium price to the buyers looking for it .

The gas engine is most efficient at constant RPM & additional electric motor lets it work in this mode most of the time , When you stop , It generates more electricity that can be used at lower speeds or for accelerating quickly , It is in town where we see our mileage jump above 50 mpg .

Gas engine runs less time in the hybrid car and thus wears less , The brakes lasts longer too , unless it is a sudden brake , The hybrid regenerates the electricity with a regenerative brake instead of applying the standard brakes and less fuel consumption leads to less frequent refueling .

Hybrid car is environment friendly , Carbon dioxide (CO2) emissions are proportional to the amount of fuel used , As the hybrid cars consume less fuel , they less pollute the atmosphere .

In the hybrid car , the gas engine starts from the deep charge high voltage battery , Comparing to the traditional 12V car battery , It has much more power , During the winter when the oil is thick & the parts are tight , It requires a lot of current from the battery to turn over the engine , In such hard conditions , the hybrid car has much more chance to successfully start the engine .

The hybrid versions of popular vehicles remain in high demand on the used car market , With the hybrid car , you will likely recoup a higher percentage of your original investment when you trade or sell .

Hybrid vehicles cost a few thousand more than the conventional gas engine version of the same model , The gas savings can take years to recoup the additional purchase price , We are to obtain EPA fuel economy estimate in the real world but this is true for standard cars as well .

If we mostly drive on open highways at high speed , We will not see very much benefit to driving a hybrid and sometimes high demand models have waiting lists and dealers will sell them for a premium over MSRP .

Hybrid vehicles are twin powered engine , The gasoline engine that is the primary source of power is much smaller as compared to what you get in single engine powered car and the electric motor is low power , Combined power of both is less than that of gas powered engine , So , Hybrid car is suited for city driving and not for speed and acceleration .

Hybrid vehicles can be expensive , The biggest drawback of having the hybrid car is that it can burn a hole in your pocket , They are expensive than the regular petrol car and they can cost $5000 to $10000 more than a standard version , But this extra amount can be offset with lower running cost and tax exemptions .

The hybrid vehicle has a gasoline powered engine , a lighter electric engine and a pack of powerful batteries , This adds a weight and eats up the extra space in the car , Extra weight results in the fuel inefficiency .

Hybrid vehicles comes with higher maintenance costs , The presence of dual engine makes it difficult for the mechanics to repair the car , It is difficult to find a mechanic with such an expertise .

The presence of high voltage in the batteries can prove lethal for you in case of an accident , There is a high chance of you getting electrocuted in such cases that can make the task difficult for the rescuers to get the other passengers and driver out of the car .

There are limited models , Currently not many variations of the hybrid cars are available , It is much harder to find a perfect hybrid car with desired exterior design and internal capacity comparing to the traditional car .

When you drive hybrid cars at high constant speed on a highway , the gas engine works optimally and the hybrid system can’t help much , In this case the traditional diesel car can usually outperform a hybrid in fuel consumption.

Most hybrid cars are built for the economy , not speed , Total output and acceleration lag behind comparable gas-only vehicles , To conserve the weight , The hybrid cars aren’t equipped with sport-tuned suspensions and other performance enhancements found on non-hybrid models .

The hybrids remain more expensive , Many buyers find this trade-off to be unacceptable , Hybrid cars cost more to repair and not all mechanics have the equipment and know-how to fix them properly , High hybrids price come with costly high-voltage batteries & two engines on board .