Classes and General characteristics of Vertebrates

Feeding : They are parasites , where they stick by their mouth into big fishes and attach themselves by the teeth , then they snap the flesh of these fishes by their rough tongue which is similar to the rasp .

They live in salt water as seas , Endoskeleton is cartilaginous , The body is covered with scales similar to the teeth , The mouth is ventral , It lies on the ventral surface of head and provided by two jaws carry several row of teeth helping them in predation .

Fins are paired , Gill slits are uncovered with an operculum , They have no air bladder, The sex is separate ( unisexual ) , Fertilization is internal, Examples: Shark and Ray. 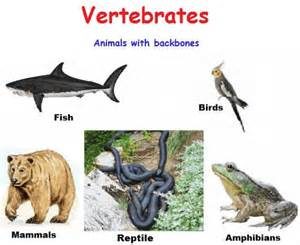 They live in salt or fresh water , Endoskeleton is bony , The body is covered by bony scales , The mouth is terminal at the anterior tip of the body , Fins are medial and paired .

Gill slits are covered with an operculum , They have air bladder helping them in swimming and floating , The sex is separate ( unisexual ) and fertilization is external , Examples : Bolti and Bouri .

The body is covered with smooth slimy skin , They have four pentadactyl limbs , They are cold-blooded animals , The sexes are separate and fertilization is external , Such as Frog and Salamander , Respiration takes place by several different ways according the stages of its growth as the following :

Frog croaking is a voice comes from male frogs during mating season  for attracting the females for mating , The male can produce this voice because it has a special structure called voice sac which does not found in females .

They respire atmospheric air by lungs , They are cold-blooded animals , Sexes are separate and fertilization is internal , The females lay eggs with calcareous or skiny shell on laud , Examples : Crocodile , Tortoise , Gecko , Lizard , Chameleon and snake .

The body is covered with feathers , They breathe by lungs , They are warm-blooded animals , Sexes are separate and fertilization is internal , The females lay eggs and incubate them till hatching , Examples : Sparrow , pigeon , Hawk , Duck , Chicken , Ostrich , Eagle .

Appropriateness ( or adaptability ) of internal structure of birds for flying : Their bones are hollow and light , The sternum is broad for attachment of the strong thoracic muscles which move wings during flying , Their bodies contain air sacs act as stores additional amounts of air during flying .

The body consists of four regions : head , neck , thorax and abdomen , It covers with skin that is covered with hair , They have four pentadactyl limbs , They provided with Claws , Nails , Hoofs or Pads , They respire atmospheric air by two lungs and they are warm blooded animals .

Teeth are dissimilar ( incisors , canines and molars ) , Sexes are separate , Fertilization is internal , The majority of females are viviparous and have mammary glands that secrete milk to suckle the youngs , Class Mammalia is classified into three sub-classes , which are :

They do not give birth but they lay eggs and incubate them , The mother suckles its youngs with milk secreted from its mammary glands on its abdomen , They have a cloacal opening through which urine , faeces and eggs emerge , Such as Duck-billed platypus and Spiny ant-eater .

They give birth immature youngs , The mother suckles its youngs from nipples found inside a special pouch at the bottom of its abdomen where it keeps its youngs until they become fully grown , Such as Kangaroo .

They are placental mammals that give birth fully developed youngs , They mother suckle its youngs with milk secreted from its mammary glands .

Eutheria includes many animals that are headed by human and it is divided into many orders , the most important ones are Edentata , Insectivora , Carnivora , Perissodactyla , Artiodactyla , Cetacea , Rodentia , Lagomorpha , Chiroptera , Proboscida and Primates .

Orders , General characteristics of Eutheria and Modern technologies in classification of living organisms