Orders, General characteristics of Eutheria and Modern technologies in classification of living organisms

All living Eutherians are placental mammals , The Eutherian fetus is fed during gestation by the placenta , Eutherians are distinguished from noneutherians by various phenotypic traits of the feet , the ankles , the  jaws and teeth , All extant eutherians lack epipubic bones .

It is the taxonomical name for the main group of living mammals , It contains the placental mammals , of which humans are one species, It was introduced by Thomas Henry Huxley in 1880 , Members of Eutheria are now found on all continents and in all oceans . 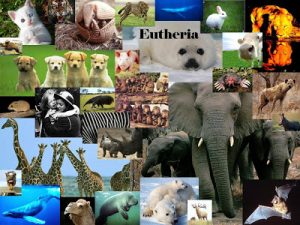 Some are without teeth , while others lost their front teeth only , They have strong , curved claws , such as armadillo and sloth .

They feed on insects and their front teeth extend outwards like pincers for capturing the prey , such as Hedgehog .

They have large pointed canines , The premolars are sharp , while the molars are broad and grinding , They have strong , sharp curved claws , Such as lion , tiger , wolf , fox , dog , cat and seal .

They are huge aquatic animals live in seas and oceans , the fore limbs are modified into paddle-like structures for swimming and the hind limbs are disappeared .

They breathe atmospheric air by lungs , Sexes are separate , The females give birth and suckle their youngs , Tail fin is horizontal , Such as whale and Dolphin .

They have a pair of incisors in both upper and lower jaws , The incisors are sharp and chisel-shaped , The tail is long and ears are small , such as Rat , Gerbo , Mouse and squirrel .

They have two pairs of incisors in upper jaw and one pair in the lower jaw , The tail is short and ears are long , Such as Rabbit .

Their fore limbs are modified into wings , where the fingers from the second to the fifth are elongated and the skin extends from the body to in between these fingers , They become active during the night , Such as Bat .

They have a long muscular proboscis , The two upper incisors grow to form what is known as the two elephant canines , Such as Elephants .

They are the most higher mammals , They have two pairs of pentadactyl limbs and the thumb finger lies away from the rest of fingers , The brain is large-sized and nervous system is highly developed in the higher forms , Such as Monkey , Lemur , Gorilla , Chimpanzee and Man .

Scientists turned to classify living organisms ( hundreds years ago ) on the basis of determining the degree of relevance and relatedness ( evolutionary relationships ) among them through .

The researches in the field of comparative anatomy for determining the anatomical similarities , Similarities in natural structures as Skeletal structures , Glands and Embryonic development .

The scientific researches on the nucleic acid DNA existing in the nucleus through DNA sequencing technique in which the arrangement and sequence of nucleotides of DNA double helix are identified , Scientists found that the greater the sequence in the order of nucleotides in DNA strand , The organisms were more relevant and related .

Recently, researchers used the extract of sponges and cnidarians (especially jellyfishes) in the biochemical and pharmaceutical industries, where :

Some possible medical uses for the paralyzing toxins that some jellyfish use to capture the preys were investigated , Investigating promising new antibiotics and anticancer compounds in some sponge species.

Although this type of biotechnology is still recent but it is very exciting where researches will probably result in the development of new medicines .