The protein filaments that form the muscle fibers slide over each other that results in the contraction or shrinkage of the muscle, where:

During the contraction of muscle:

In relaxation state ( when the stimulus disappears )

The theory of Huxely is not acceptable 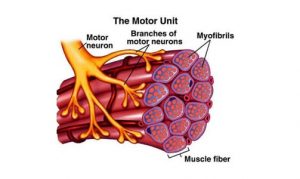 The motor unit consists of a group of muscle fibers and the nerve fibers supplying them, where: when the motor nerve fiber enters the muscle, it divides into a large number of branches inside the muscle.

Each motor nerve fiber supplies a group of muscle fibers (its number ranges between 5-100 fiber) through its terminal branches, where each one of them is attached to one muscle fiber at a place called the motor end plates and the point of connection is called the neuro-muscular junction.

The causes of muscle fatigue

The repeated and rapid contraction of the muscle is due to:

The inability of blood to supply the muscle rapidly with the oxygen that is needed for its respiration and energy production, therefore the muscle converts the glycogen (animal starch) into glucose which is oxidized anaerobically (shortage of oxygen) to produce rapid energy to allow the muscle to contract, leading to the accumulation of lactic acid which causes muscle fatigue.

Getting rid of muscle fatigue

When the muscle stops moving that gives the chance for it to be supplied by enough amount of oxygen to perform the aerobic cellular respiration which produces a large amount of ATP molecules that separate the transverse links from the actin filaments, leading to the relaxation of the muscle, therefore it goes on an alternation of contraction and relaxation once more.

Notes: The muscle spasm may occur due to the troubles that resulted from the arrival of incorrect nerve impulses from the brain to muscles during its normal performance, The excessive and over spasm may lead to the tearing of the muscle, causing a bleeding.