Mendel is considered as the founder of heredity because the scientific studies of heredity started with Mendel’s experiments on pea plane and according to the results reached by Mendel, heredity scientists have gathered a lot of information about how the hereditary traits are transmitted from one generation to another.

Genetics explains to us the existence of similarities between you and your brothers or sisters as well as the differences in some external traits. This is because genetic traits transfer from a generation to another according to the basics and laws that geneticists reached.

Hereditary traits are the traits that are transmitted from one generation to another. Examples: Hair colour, Skin colour, Number of fingers, and blood groups. 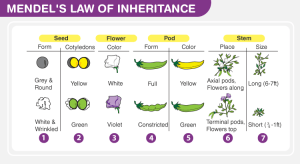 Mendel was the founder of heredity

Acquired traits are traits that aren’t transmitted from one generation to another. Examples: Skill of playing football, Learning of swimming, Speaking in many languages, and learning of walking in children.

The science which studies the hereditary traits and laws governing how they are transmitted is called “Genetics. Genetics is a science that researches the transmission of hereditary traits from one generation to another by studying the similarities and differences between the parents and the offspring.

Mendel was the founder of heredity

The scientist Gregor Mendel was the first founder of heredity because the scientific studies of heredity started with Mendel’s experiments on pea plants and according to the results reached by Mendel, scientists of heredity have gathered a lot of information about how the hereditary traits are transmitted from one generation to another.

Reasons for choosing Mendel for pea plant to conduct his experiments

First: Study the inheritance of any one pair of contrasting traits

Mendel studied the inheritance of each pair of these contrasting traits separated by the following specific scientific steps.

Mendel made cross-pollination as follows:

All the produced plants which he named them the first generation have yellow seeds (at a percentage of 100%) and the green coloured seeds trait disappeared completely in the individuals of first-generation. So, Mendel called:

Mendel let the first-generation plants do self-pollination. then he planted the resulting seeds. Mendel observed that: the produced plants which he named them the second generation: Three quarters are of yellow seeds (75 %). Its quarter is of green seeds (25 %). This means that the ratio of the plants of the second generation:

The principle of complete dominance is the appearance of a dominant hereditary trait in the individuals of the first generation when two individuals are crossed, one of them carries a pure trait contrasting the trait carried by the other individual.

Mendel removed the stamens of pea plant flowers before the anther becomes mature to insure that the plant doesn’t be self-pollinated. Mendel covered the stigmas of the pistils of pea flowers during studying the hereditary traits to prevent cross-pollination with other flowers. Mendel let the pea plants self-pollinate for several generations to be sure of the purity of the trait.