Each pair of chromosomes behaves independently at its transmission in gametes , During fertilization ( fusion of male gamete with the female one ) the diploid number of chromosomes returns back again.

Genes are located on the chromosomes and the single chromosome may carry hundreds of genes , The two scientists Sutton and Boveri had reached to the principle of the chromosome theory in 1902.

Interpretation of Mendel’s Laws according to chromosomes theory :

In 1860, after his experiments on pea plant Gregor Mendel had arrived into the following :

Each trait is controlled by one pair of genetic factors ( which later named genes ) that may be dominant or recessive . 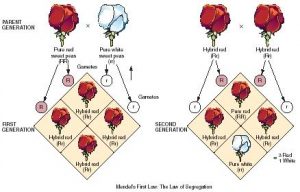 When crossing two homozygous ( pure ) individuals , one of them bears the dominant character and other bears the recessive character :

The dominant character appear at 100 % in first generation .

Both of the dominant and recessive characters appear in members of second generation in ratio 3 : 1 and these characters ( genetic pattern ) are called Mendelian characters ( traits of complete dominance ) .

In meiosis , The genes carried on the chromosome pairs are segregated into the gametes and During fertilization , The chromosomes return back again in pairs.

When crossing two individuals bear two pairs or more of different allelmorphic characters , each pair of characters is inherited independently where :

The two dominant characters appear at 100 % in members of first generation .

Both the two dominant and the two recessive characters appear in ratio 9 : 3 : 3 : 1 in members of the second generation .

Assortment of genes that carried on the chromosomes in gametes is independent because each gene is located on a separate chromosome .