Pollination in flowering plants is the process of transferring the pollen grains from the anther to the stigma of the flower, Types of pollination are self-pollination and cross-pollination.

Self-pollination is the transfer of pollen grains from the anther of a flower to the stigma of the same flower or to the stigma of another flower on the same plant, The flowers are hermaphrodite, where: organs of the two sexes must be matured at the same time, The anther level must be higher than the stigma level.

Means of pollen grains transportation in cross-pollination are air, insect, water & man, Cross-pollination is the transfer of pollen grains from the anther of a flower on a plant to the stigma of a flower on another plant of the same species, The flowers are hermaphrodite, where: Organs of one sex must be matured before the other sex, the level of anther must be lower than the level of stigma, The flowers are unisexual. 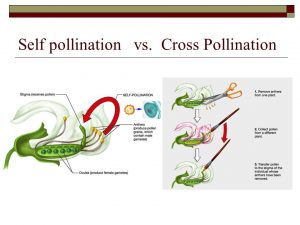 This process takes place according to the two following steps:

It includes two stages which are fertilization of the ovule and triple fusion.

Fertilization of the ovule occurs as follows:

Triple fusion is the process of fusion of one of the two male nuclei of pollen grain with the two embryonic sac nuclei to form the endosperm nucleus.

After the fertilization, the calyx, corolla, androecium, style and stigma wilt and fall out, only the ovary remains.

The ovary stores food, increases in size and ripens, transforming into a fruit, due to the hormones (auxins) that are secreted by the ovary, the ovary’s wall transforms into the pericarp.

The two synergid cells and antipodal cells decay, while the micropyle remains to allow the entry of water into the seed during the germination, The ovule’s wall becomes the seed coat.

The embryo keeps the endosperm, so that it remains present, The integuments of the ovary and ovule fuse together, forming a single-seeded fruit which called the grain, Seeds with one cotyledon, Examples: maize and wheat.

The embryo feeds on the endosperm during its development, so, the plant has to store another food for the embryo in two cotyledons, The integuments of the ovule harden, forming the seed coat or testa which is called the seed, Seeds with two cotyledons, Examples: beans and pea.

The fruits and seeds maturation often leads to the discontinuity of plant growth and sometimes to its death, especially in the annual plants, due to the consumption of the stored nutrient substances and inhibition of hormones, If pollination and fertilization do not take place, the flower wilts and drops off without fruit formation.

There are some fruits which keep some parts of the flower, for example:

The annual plants are plants that complete their life cycle from the germination to the seed production within one year, then degenerate after leaving their seeds in the soil, Examples: maize and barley.

Parthenocarpy is the natural development of fruits that are devoid of seeds, because they are formed without fertilization (which is not considered as a reproduction, Types of parthenocarpy are natural and artificial, It occurs naturally in banana and pineapple, It occurs artificially by spraying the stigma with the extraction of pollen grains or using indole or naphthol acetic acid to stimulate the ovary to form the fruit.

Parthenogenesis occurs in animals, The ability of the ovum to develop into a new individual without the fertilization by a male gamete, It is considered as a special type of asexual reproduction, It occurs naturally in aphid insect and honey bees, It occurs artificially by activating the eggs through their exposure to thermal or electric shock or radiation or some salts or agitation or pricking with needles as in the frog and sea star or by using similar stimulants to form early embryos from their ova as in the rabbits.

Reproduction in flowering plants, Structure & functions of the flower