Pectoral girdle and the upper limbs 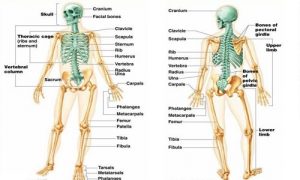 The pectoral girdle consists of two identical halves, where each half consists of (scapula and clavicle), the scapula is a triangular dorsal bone whose inner end is broad, while the outer end is pointed and has a process to which the clavicle is attached.

The clavicle is the ventral thin bone that is attached to the sternum anteriorly and to the scapula laterally, There is a cavity at the outer end of the scapula which called the glenoid cavity through which the articulation with the fore-limb (head of humerus) takes place, forming the shoulder joint.

Each upper limb consists of Upper arm, Forearm and Hand bones, Upper arm that is supported by one bone called humerus, Forearm consists of two bones which are:

The pelvic girdle and the lower limbs

The pelvic girdle consists of two identical halves that are fused at the ventral side at a region called the pubic symphysis and each half consists of (dorsal ilium, pubis & ischium), where the dorsal ilium is attached.

At the position of attachment of ilium and ischium bones, there is a deep depression called acetabulum into which the head of thigh bone (femur) fits, forming the hip joint, The public symphysis is the region at which the identical halves of the pelvic girdle are fused at the ventral side.

Ankle consists of seven bones that are irregular in shape called tarsals and the largest one is that at the back which forms the heel.

Foot consists of five bones called metatarsals which are long, thin and ended with the bones of five toes.

Food toes: Five toes, where each of them consists of three bones called phalanges, except the big toe which has two phalanges only.