It is the process that occurs when the solute decomposes into negative and positive ions or into separated polar molecules , Each of them binds to the molecules of the solvent .

Although the water molecules seem static in the beaker, but they are really in a continuous motion, especially the surface molecules ( due to their kinetic energy ).

Dissolving ionic compounds and polar compounds in a polar solvent

Dissolving of sodium chloride in the water

The polar water molecules collide with the crystals of NaCl by their kinetic energy , The water molecules attract Na+ and Cl− ions by directing the suitable pole towards them to be separated from NaCl crystals .

The water molecules which surround the ions isolate positive ions from negative ions and prevent their binding again, The speed of the dissolving process depends on the surface area of the solute , the stirring process and the temperature .

Degree of Solubility is the amount of solute in grams , which dissolves in 100 g of solvent to form a saturated solution at saturated temperature and pressure ( STP ) .

The solubility is affected by the temperature and the nature of solute & solvent .

The nature of solute & solvent

Like dissolve like is well known statement which controls the solubility process , this statement can be explained as follows :

Solubility of some substances in polar and non-polar solvents

Three tubes contain a heterogeneous mixture of the water and methane dichloride .

Oil is soluble in benzene because oil ( non-polar substance ) is dispersed between molecules of benzene ( non-polar solvent ) due to the weak bonds between the benzene molecules .

Sugar is soluble in the water, although sugar is a non-polar substance because the water molecules make hydrogen bonds with the sugar molecules ( polar hydroxyl groups ).

Effect of temperature on solubility 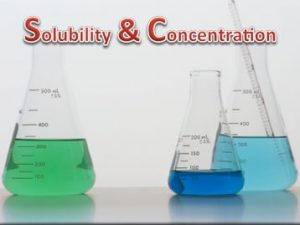 This method is suitable to express concentration for food and medicines .

Mass percentage is the percentage of the mass of solute in 100 g of solution .

Some solutions are prepared on a volume percentage because liquid volumes are so easily to be measured .

The stickers placed on medicines and nutritional substances must show the units that express the solute percentage , due to the presence of many types of percentage .

It is the number of moles of the solute dissolved in one litre of solution , The unit of molarity is ( mol / l ) or Molar ( M ) .

It is the number of moles of solute in one kilogram of solvent , The unit of molality is mol / kg or ( m ) .