Alkynes are unsaturated open-chain hydrocarbons which contain at least one triple bond in the carbon chain, they form a homologous series, Its general molecular formula is (CnH2n-2), where n the number of carbon atoms, total number of atoms = 3n-2, Each compound is less two hydrogen atoms than the corresponding alkene and four hydrogen atoms than the corresponding alkane.

The first compound of this group is ethyne C2H2, its common name is acetylene ( this group is named by its name, There are three bonds between carbon atoms, one of the triple bond is a strong sigma bond (σ) while the other two bonds are weak pi bonds (π) which are easily broken, Therefore, Alkynes are chemically very active due to the presence of two weak pi bonds. 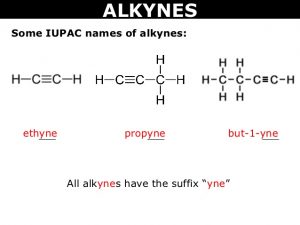 By using the same method used in the nomenclature of alkenes, where we choose the longest continuous carbon chain, the name of alkyne is derived from the name of the corresponding alkane by replacing the suffix (ane) by suffix (yne).

Numbering the carbon chain starts from the end which is nearest to triple bond whatever the position of any other branched group, The name of the alkyne is proceeding by the number of carbon atom which is attached to the triple bond.

Preparation of acetylene in the lab from calcium carbide CaC2 :

Sand is used in the flask to protect it from breakage, Before the collection of the gas, Acetylene gas must be firstly passed over copper sulphate solution in diluted sulphuric acid (H2SO4) to remove the impurities mixed with calcium carbide as phosphine PH3 and hydrogen sulphide H2S , they are produced from the impurities found in calcium carbide.

Preparation of acetylene in the industry from natural gas:

Ethyne can be prepared in the industry from natural gas which contains a high ratio of methane by heat to a high temperature higher than 1400°C then fast cooling (rapid quenching) for the product.

Ethyne burns with a smoky flame in the air where oxygen is a limited amount because carbon doesn’t completely burnt.

Oxyacetylene flame is the flame produced when ethyne is completely burned in air, the amount of heat reaches about 3000°C, so it used for welding and cutting metals.

Alkynes contain 2 pi bonds and only one sigma bond, The 2 pi bonds can be broken, so, we add two molecules, As ethyne contains two (pi) bonds beside one sigma bond, it reacts by addition in two steps, the triple bond is changed to double and then to single bond, Ethene reacts by addition in one step whereas ethyne reacts in two steps because ethene contains only one pi bond while ethyne contains two pi bonds.

Hydrogenation (in the presence of finely divided nickel) is a chemical process in which nascent hydrogen is added to an unsaturated compound in the presence of a catalyst to be changed into corresponding alkanes.

Halogenation of Acetylene: Ethyne reacts vigorously with halogens, this reaction may be accompanied by flame and light when it reacts with chlorine, However, when ethyne is passed through bromine water dissolved in carbon tetrachloride CCl4, the red colour of bromine is disappeared, this reaction is used to detect the unsaturation of ethyne.

Halogenation is the entering of one or more halogen atoms in the molecule of an organic compound ” substitution reaction”, The reaction of acetylene with halogens is used to detect the presence of triple bond in acetylene, where the red colour of bromine is removed, so, we can’t differentiate between ethene and acetylene by using B2 water because the red colour of bromine is removed in the two cases.

Addition of water (Catalytic hydration of Acetylene): It is the reaction of alkynes like Ethyne with water by addition in the presence of a catalyst ( H2SO4, HgSO4) at 60°C to give acetaldehyde (ethanol).

Vinyl alcohol (CH2CH2O) is unsaturated alcohol which is produced as an intermediate compound on adding water to ethyne in the presence of a catalyst, This reaction is used to prepare ethanoic acid (acetic acid) by the oxidation of acetaldehyde (ethanol), Ethyl alcohol can be obtained by the reduction of acetaldehyde.

Cycloalkanes, Aromatic hydrocarbons, Preparation of benzene in industry and lab