The properties of Suspensions and Colloids

It is a heterogeneous mixture in which the diameter of its particles is larger than 1000 nm and it can be distinguished by the naked eye, such as the sand in the water and Chalk’s powder in the water.

It is a heterogeneous mixture in which the diameter of its dispersed particles ranges between 1: 1000 nm and it can be distinguished by the electron microscope . 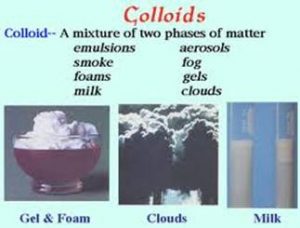 How can you distinguish between the colloid and the true solution ?

By allowing a beam of light from a lamp to fall on each one , The colloid scatters the light because the size of the colloid particles is large enough , this phenomenon is known as Tendal’s phenomenon .

Classification of colloidal systems according to the state : 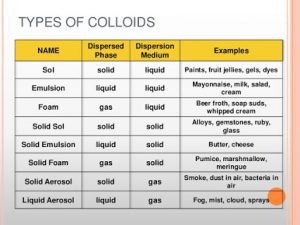 There are two methods which are Dispersion method and Condensation method .

Dispersion method : The substance is crushed into small particles until its diameter reaches between ( 1 : 1000 nm ) , then added to the dispersed medium with stirring such as starch in hot water and cappuccino coffee .

Condensation method : The small particles are collected together into larger particles have the same volume of the colloid particles , by some processes like Hydrolysis , Oxidation – reduction .

Such as in the reaction of hydrogen sulphide with sulphur dioxide, where the atoms of sulphur in the water form colloid .

Chalk’s powder forms a suspension in the water because the size of chalk’s particles is > 1000 nm.