Thermochemistry science, Types of systems & law of conservation of energy

Energy is very important in our life , where we can’t carry out different activities ( mental or muscular ) without the produced energy from burning sugar inside our bodies , we can’t cook our food without the heat energy produced from the burning of natural gas .

There are various forms of energy like Chemical energy , Heat energy , Light energy , Electrical energy and Kinetic energy , In spite of this classification of energy into different forms , There is a relationship between all of these forms , as the energy is converted from one form to another , this leads us to the law of conservation of energy .

Law of conservation of energy

The energy in any physical or chemical change can be neither created nor destroyed, but it is transformed from one form to another. 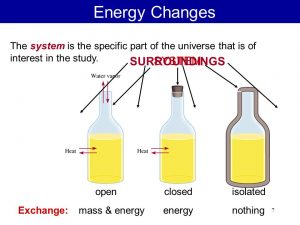 All the chemical reactions and the physical changes are accompanied by changes in the energy , Thermochemistry is a branch of thermodynamics which concerned with these changes.

Before studying of how we can calculate the heat changes accompanying the chemical and physical change , we have to know the following basic concepts: System and surrounding, First law of thermodynamics , Temperature and heat , Specific heat .

System is the part of the universe chosen for study in which the physical or the chemical change occurs , Surrounding is the part outside the system that exchanges the energy with the system in the form of heat or work .

The chemical reactions are accompanied with changes in the energy ( releasing or absorbing ) , this energy exchange occurs between the reaction mixture and its surrounding , where :

First law of thermodynamics includes the study of the energy exchange between the isolated system and its surrounding .

First law of thermodynamics : The total energy of an isolated system is constant even the system is changed from one state to another .

You can read this article about Combustion ( bomb ) Calorimeter , Specific heat and calculation of the quantity of heat