Electrolytic cells are electric cells in which the electric energy from an external source is converted to chemical energy used through a non-spontaneous oxidation-reduction reaction, The anode is the positive electrode at which oxidation process takes place, The cathode is the negative electrode where the reduction process takes place, The emf is negative sign, such as the cell of aluminum extraction.

One of the electrodes is connected to the positive pole of the battery to become positively charged electrode at which oxidation reactions occur at (anode), The other electrode is connected to the negative pole of the battery and at which reduction reactions occur at (cathode), Electrolytes which are used as ionic conductors in these cells differ from electronic conductors (metals).

When the two electrodes are connected where the applied potential on the cell slightly exceeds the potential of the reversible cell, An electric current in the electrolytic cell flows and the positive ions in the electrolytic solution between the two electrodes are directed towards the negative electrode (cathode) and neutralize their charge by accepting electrons (reduction), The negative ions from the electrolytic solution are directed towards the positive electrode (anode) and neutralize their charge by losing electrons (oxidation). 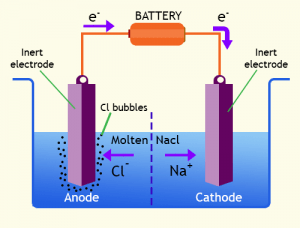 Copper is precipitated at cathode and chlorine is evolved at anode, Cell potential is the sum of the oxidation and reduction potentials of the two half-cells, Cell potential (emf) = − 1.36 + 0.34 = − 1.02 Volt, The negative sign for cell potential means that the total cell reaction occurring is non-spontaneous if it was a galvanic cell but it is completed in electrolytic cell by using electrical energy from an external source.

When the electric current passes through the electrolyte.

The oxidation-reduction reactions which happened inside the electrolytic cell are considered as a non-spontaneous reaction because it can not be done without using electric current.

The difference between the electrolytic cell and the galvanic cell

The galvanic cell converts the chemical energy to the electric energy, The anode is the negative electrode in the cell where the oxidation process takes, The cathode is the positive electrode in the cell where the reduction process takes place at it, The oxidation-reduction reactions are spontaneous (does not need an external electric source), There is no external source, It needs salt bridge, The two electrodes should be different, and there is a potential difference between them.