Kodu Game Lab is an educational programming language, It is the game design engine that designed like a game itself. It is originally named Boku, It is designed for the game’s development and it provides you with specialized primitives derived from the gaming scenarios.

Kodu Game Lab is the new visual programming language that made specifically for creating the games, It is designed to be accessible for children and enjoyable for anyone, It runs on the Xbox that allows rapid design iteration using only the game controller for input.

The programs are expressed in physical terms, using concepts like the vision, the hearing, and the time to control the character behavior, With Kodu you can have all that power without the complex coding required if you didn’t use Kodu. 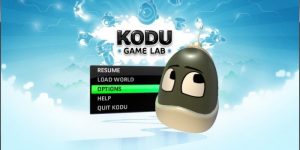 Kodu Game Lab is easy to use, It is suitable for any age, and It can be picked up in minutes, It offers a strong backend from XNA, The code is not necessary, You can create your own games easily, and you don’t even need any programming skills, and you do not need the coding skills. Kodu Game Lab is radically different from any other coding editor, and it is the kid-oriented programming environment that lets anyone build their own games without writing a single code line.

Kodu Game Lab features an eye-catching design which makes it feel like a game by itself, It includes the lessons and the sample games to get you started and make things even easier, You will find many ready-made objects, characters and obstacles that you can arrange with the keyboard and the mouse and the program with a special card system.

Kodu Game Lab is an original visual programming environment, It is powerful, It is really easy to use, It includes the lessons and the sample games, It is not as the classical programming languages, and it expresses the advanced game design concepts in the simple and direct manner.

Kodu Game Lab is free, It is Fun, treat as a puzzle, It can be played on Xbox, It doesn’t need Visual Studios, It can be exported (and thus played on another PC), It is designed to be accessible by anyone, and it is available to download as an Xbox 360 Indie Game.

Kodu Game Lab provides a creative environment with designing, building, and playing your own new games, It is the high-level language that incorporates real-world primitives color, vision, It uses Xbox 360 Game Controller for input, and the keyboard is not required.

Kodu Game Lab offers a programming user interface, It is simple and entirely icon-based, The programs are composed of the pages that are broken down into the rules which are further divided into the conditions and the actions, and the conditions are evaluated simultaneously.

Many different types of games can be made in Kodu such as racing, strategy, RPGs, the adventure, the platform, the puzzle, the 1st person shooters & others, Kodu Game Lab is used as the educational learning tool in the schools and the learning centers, Kodu’s programming model is simplified and it can be programmed using the gaming controller or the combination of the keyboard and the mouse.

Kodu Game Lab is sometimes not very responsive and laggy, It slows the computer down for other tasks (the heavy use of 3D engine), It is still primitive, It is a Microsoft experiment that’s still in development, This means you can expect some bugs and odd crash but other than that it is perfectly usable.

There are some obvious limitations to Kodu as it is intended for kids with little or no experience in coding, but it is a fun, colorful way to get them started in the hobby of creating videogames, It offers a limited selection of objects, and it can’t be converted into a standalone application.