iOS 7 includes the peer-to-peer SDK as well which would enable the developers to build an exclusive framework to help many users who are close by, to wirelessly exchange the data between their devices , via Wi-Fi, P2P Wi-Fi and Bluetooth.

The general look and feel of the UI has undergone a sea change with the new upgrade, The new version looks modern and contemporary, sporting an understated, authentically digital look, using blur, transparency and layering to add an illusion of depth .

The processor has impressive performance , making it easy to do powerful multitasking activities , Apps function efficiently in the background even while not in use and yet , do not hinder the overall system performance .

The social networking sites of all sorts are available in this recent upgrade which is a boon not only for the consumers but for everyone in the digital industry including mobile marketers , business people , app developers , and those who want to get in touch with a wider audience base through the social media . 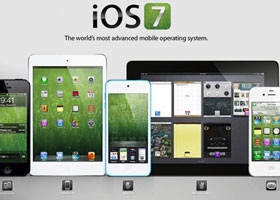 The latest version offers far better iCloud facilities , AirDrop for sharing the documents with other devices , enhanced control of GUI ( or Graphical User Interface ) handling , and improved open GL functionality which improves the rendering of graphics on the device .

iOS 7 brings with it efficient processor performance and powerful multitasking abilities as well , This implies that apps are far more efficient and can still function in the background while inactive without negatively impacting the performance of the system as a whole .

iOS 7 Control Panel is a slide up menu that gives you access to the music , alarm clock , Wi-Fi , Bluetooth , Airplane mode , Do Not Disturb , Orientation Lock , and calculator , You can now control brightness with a slider right below these toggles , In the new control panel , There is no need in navigating through Settings menu .

iOS 7 Control Panel takes up ¾ of iPhone screen in portrait mode and the whole screen in landscape mode , The Control Panel looks a bit different on the iPad , being smaller and wider , with easy access to the music , You control the currently playing songs while pausing , skipping some tracks and interacting with iRadio  .

There is iOS 7 multitasking , Multitasking is not the feature previous iOS versions dealt with , When upgrading to iOS 7 the first thing you will mention is that there are big previews of apps that are now running , no more jiggling icons and x-tapping , The previews allow you to see the information in an app without leaving the app you are currently in .

Although iOS 7 camera app now brings some additional specs like the ability to swipe between shot types and take burst shots , Not all the photos come out perfectly and sometimes we need to take several pictures to get the photo you like .

ُiOS 7 AirDrop allows you to share the photos , contacts , notes , bookmarks , iTunes Radio stations , To start using AirDrop , go to Control Center and tap on the AirDrop button , Select whether you want to be discoverable to everyone or just some selected contacts .

This upgrade which focuses on combining stability with high performance , It offers developers several useful tools to help them build fast and powerful apps which would also prove to be useful to many users .

The background updating eats the battery life , iOS 7 refreshes app data and updates apps automatically which is too heavy on the battery,  turning it off helps  poor response to touch , Similar to the iPad , you will have to tap and retap pretty often , And basic iOS 7 camera UI with limited settings .

Apps for the iOS 7 are already quite expensive to make , as soon as people find out that it runs slow on older iPhones and iPads , they will just ignore it , And existing apps on a new OS might not be work at all .

Some UI elements might not look good enough if used in old smartphones  , And Buggy apps that always crash might discourage potential iOS 7 switchers ,  iOS 7, though much advanced , is also considerably different from the previous versions of the iOS , migrating apps from the latter to the former would pose the greatest challenge for app developers .

iOS 7, though compatible with iPhone 4 , runs very slowly on the device , Many users of iPhone 3G and older iPhones and iPods are generally unwilling to go in for the latest smartphone model , Developers who create apps exclusively for the latest version would end up losing out on a considerable customer base .

The UIKit framework included in iOS 7 SDK is different from the previous versions , This may result in some UI elements not looking good enough or worse , not rendering well enough on the device , Buggy apps that crash frequently will only result in the users being discouraged from using them .