Wireless Internet routers or Wi-Fi modems use dangerous electromagnetic radiation to send their signals to your computer through the walls, Wi-Fi can negatively affect the overall health and brain health especially the children.

If you have a wireless Internet router set up in your home or office (or WiMax, Blue Tooth, Air-Port Extreme, Air-Port Express, Netgear, D-Link, Belkin, Linksys, and the other wireless network devices) you are receiving massive EMF exposure, and living or working in a dangerous soup of radiation.

The child’s brain absorbs this radiation maximally, the children also absorb the microwave radiation more readily than the adults because they have thinner skulls, the radiation damages the childhood development.

DSL routers and the cable modems that make it so convenient to get online emit the electromagnetic radiation in the low gigahertz frequency level which is considered as potentially dangerous. 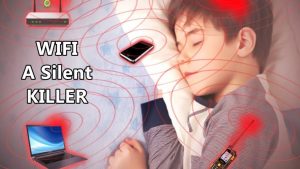 The typical home or the office wireless networks transmit the radio signals in the same general frequency range as the frequency that the microwave ovens use to cook the food.

Most Wi-Fi health damage comes from the cable modems and DSL routers that don’t get turned off at night,  they stay on and connecting your machines to the internet whether you’re surfing or not, and flooding your space with EMFs 24/7.

Wi-Fi radiation may impact the fertility, some wireless frequencies may prevent the egg implantation, The cellular damage and impact on DNA structure from exposure suggest a strong possibility of abnormal pregnancy or failure of the egg to implant.

The pregnant women must avoid using wireless devices themselves, and distance themselves from other users, and the exposure to Wi-Fi frequencies reduces the sperm movement and cause DNA fragmentation.

The radiation of router contributes to the development of Insomnia,  It’s been suggested that sleeping near a phone, in a home with Wi-Fi, or in an apartment building with many Wi-Fi signals can create chronic sleep problems as the constant bombardment of Wi-Fi pollution interferes with falling asleep and the sleep patterns.

For many people, sleep deprivation is just the start for the larger problems, The development of depression and hypertension has also been linked to inadequate sleep.

More scientific EMF studies suggest that the prolonged exposure to the wireless DSL or the cable devices cause the tumors, as well as the memory loss and the other forms of brain damage.

The electromagnetic radiation in an area swamped with EMFs from the wireless technologies from the nearby homes causes the experiencing sleep disturbances, heart palpitations, migraines, and the general poor health.

The persons exposed to 4G radiation had several areas of reduced the brain activity and function, they have many problems with the concentration, high artificial EMFs have been shown to disturb the human body’s natural energetic field, They cause the stress and the fatigue as well as DNA changes and the degenerative diseases like cancer.