In the General Conference of Weights and Measures in 1960, Scientists agreed to add other four fundamental physical quantities to have an International System of units ( SI units ) ( also known as the Modern Metric System ) which is applied in all scientific fields all over the world .

William Thomson is a British scientist who determine accurately the value of the absolute zero (the zero point on Kelvin scale), He found it to be – 373 degree Celsius, So, He is considered one of these who developed the Metric system .

Ahmed Zeweil is an Egyptian scientist who used a laser camera to study the mechanism of chemical reactions between molecules that take place in a very short time, estimated by femto-seconds (fs = 10−15 s ), He won Nobel Prize in 1999. 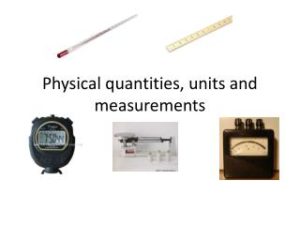 There is a model for each measuring fundamental unit that can be referred to in order to calibrate this unit , These models are called standard units , Examples of these standard units are :

The Standard Length ( The Meter )

French people were the first who used the meter as a standard unit for measuring the length , The standard meter can be defined as the distance between two engraved marks at the ends of a rod made of Platinum and Iridium alloy kept at 0 degree Celsius , at the International Bureau of Weights and Measures near Paris .

Platinum and Iridium alloy is used in making standard meter because it is rigid , chemically inactive and not affected by the surrounding temperature contrary to other materials such as glass .

In 1960 , in the General Conference of Weights and Measures , scientists agreed to replace the previous definition of the standard meter with another one in terms of the wavelength of the red-orange light emitted by the krypton atom 86 which is one of the atomic constants .

The atomic standard meter equals to a specific number of wavelengths ( 1650763.73 ) of the red-orange light emitted in vacuum by the atoms of Krypton ( mass number 86 ) contained in discharge tube .

The atomic standard meter is preferred to the international standard meter because it is more accurate where the relative error is as small as few microns and it is not affected by environmental conditions .

The Standard Mass ( The Kilogram )

The Standard Time ( The Second )

Recently, The scientists use the atomic clocks such as the Cesium clock to calibrate the second because of their high accuracy.

The atomic Cesium clock is used for determining the duration of the Earth spin ( the day length ) , Checking up for the aviation and navigation , Verifying the journey schedule of space ships that explore the universe .

Hallmark and balances department is an expert office in Egypt to assay and calibrate weighing scales , measuring tools and bushels , It is also concerned with supervision and inspection and it has 54 branches in all over the country . 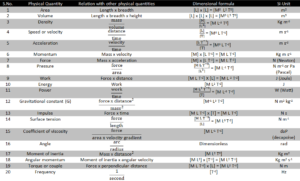 We can multiply or divide physical quantities of different dimensional formula , in this case a new physical is obtained , Distance ( m) / Time ( s ) = Speed ( m/s) .

Dimensional formula can not be added or subtracted but it can be multiplied or divided, Numerical constants ( numerals ) such as ( ½ , 2 , π ) and trigonometry functions such as ( sin , cos and tan ) have no dimensions .

The importance of the dimensional formula

The dimensional formula can be used to verify the validity of a physical relation when applying the dimensional analysis , dimensions of both sided of the equation should match .

Multiples and Fractions of Units described by a numeral and a unit of measurement , In some cases these values are very huge , for instance the distance between two stars is very vast , on the other hand , some values are very minute .

It is very difficult to read each values , We prefer to express the magnitude of physical quantities is known as the standard formula which is the way of expressing the very large or small values in the form of power of 10 to be easier to read, The distance between two stars can be written as ( 1 × 1017 ) and the spacing among the atoms in solids can be written as ( 1 × 10-9  ).