Light is an essential form of energy , The Sun is the most important source of light energy , It is the main natural source , It gives us heat & light , where it provides the green with light energy to carry out photosynthesis process to make their own food , Man depends on plants & animals , which feed on plants , It provides the living organisms with heat energy for warming .

Light is an electromagnetic wave and has its own properties .

In 1873 , the British scientists James Clerk Maxwell developed his equations according to the previous work of Michael Faraday which proved the connection between the electric field and the magnetic field where vibrations or the movement of charges generate transverse electromagnetic waves .

As , the propagation of electric waves or magnetic waves does not require a materialistic medium , the electromagnetic waves also do not require the existence of a physical medium spread through which led to the abandonment of scientists on the idea of ether .

However , modern physics has proven the principle of duel nature of waves , which states that the electromagnetic waves have :

It is clear that the visible light is a limited part of the electromagnetic spectrum , Properties of light waves are Reflection , Refraction , Interference , Diffraction . 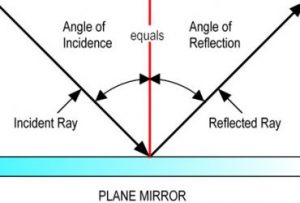 When light falls perpendicular on a reflecting surface , it reflects on itself , It is easier to see your reflection on the glass window of a lighted room at night when the outside is dark than seeing your reflection in daytime .

When outside the room is so dark , The intensity of light passing from outside into the room is very small , So , the person can see his image as a result of a small amount of light reflected on the glass inside the room .

When outside the room is lighted, The intensity of light passing from outside is larger than the reflected light intensity inside the room, So, it is difficult for the person to see his image by reflection.