Measurement is the process of comparing an unknown quantity with another quantity of its kind (called the unit of measurement) to find out how many times the first includes the second, Key elements of measurement process are the physical quantity, measuring tools and units of measurement.

Measurements translate our daily observations into quantities amounts that can be expressed in terms of numerals, for example, describing the temperature of a person as being high is scientifically inaccurate, better to measure it using a thermometer to know its value.

For example : when a moving body covers a distance ( d ) in time ( t ) , then its velocity ( v ) can be expressed as, Velocity = displacement / Time, V = d / t, This relation is called physical mathematical equation. 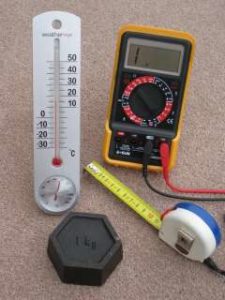 The measuring tools have been tremendously developed in the context of the great industrial evolution next to the Second World War , consequently , these tools were very helpful to man in describing phenomena accurately and exploring facts .

The used measuring tool depends on the physical quantity to be measured, some ancient and modern tools for measurement, To measure length, There are some tools such as Meter tape, Ruler, Vernier caliper & Micrometer.

The object is placed between the two jaws of the caliper and gently pressed , the reading on the fixed scale is recorded just before the zero mark of the sliding scale lines up .

Add the vernier reading to the fixed scale reading to obtain the measured length .

Measuring the surface area of a cylinder

Determination of the area of the cylinder base

Put the cylinder base on a graph sheet and mark its base , Remove the cylinder and measure the diameter of its base ( 2r ) by the ruler , Calculate the radius ( r ) and then find the base area which is circular in shape ( π r² ) .

Determination of the lateral area of the cylinder

Another method to determine the lateral area of the cylinder