1. The distance between the ear and the sound source

If you stand in front of your classmate, who produces a sound, then you move away from him gradually. You notice that the intensity of sound becomes fainter gradually as you move farther away from the sound source. This is because the intensity of sound (I) at a point is inversely proportional to the square of the distance (d²) between that point and the sound source and this is known as “The inverse square law of sound”

2. The amplitude of vibration of the sound source

3. The area of the vibrating surface

Ring the alarm clock, then put it on the air vacuum pump and cover it with the glass jar. The sound is heard clearly. Evacuate (pump-out) the air inside the jar gradually (by pulling the arm of the vacuum pump outwards). The sound intensity decreases gradually until it stops as the air is pumped out of the jar.

Sound quality (Type) is the property by which the human ear can distinguish (differentiate) between different sounds according to the nature of the source even if they are equal in intensity and pitch.

How can human ears distinguish between sounds from different sources [such as tuning fork, violin and piano]:

These complex tones are composed of a fundamental tone associated with other tones higher in pitch and lower in intensity known as “harmonic tones”. These harmonica tones differ from one source of sound to another depending on the nature of the sound source.

Harmonic tones are tones that accompany the fundamental (basic) tone but they are higher in pitch and lower in intensity and differ from one instrument to another. The human ears distinguish between sounds from different sources even if they are equal in intensity and pitch, due to the difference in the harmonic tones that associate the fundamental tone produced from the source of the sound.

Comparison between sound waves according to their frequencies

The human ears are affected by sounds of a frequency ranges between 20 Hz – 20 KHz, Based on the frequencies of sounds that the human ear recognizes, sound waves are classified as in the following order:

Some sound waves can’t be heard, because the frequencies of these waves are lower than 20 Hz or higher than 20 KHz, so the human ears cannot hear them.

Range of the heard sounds by some living organisms

When the Ethiopian chickens that live in Africa depart their home suddenly, this gives an indication of rainfall the day after, This is explained by their high sensitivity to the infrasonic waves associating weather changes preceding rainfall, On the other hand, some sea creatures like shrimp and whales produce ultrasonic waves as sound shots to kill the fish they feed on. 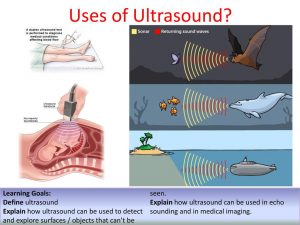 Ultrasonic waves used in several medical, industrial, and military fields such as

When ultrasonic waves collide with a landmine, it vibrates, And due to this vibration, it produces waves that travel through the Earth’s surface to be discovered by using a specialized laser device.