Alternating current generator is a device which converts the mechanical energy into electric energy, When the coil rotates between the two poles of the magnet, it intercepts the magnetic flux lines which generates the induced emf and induced electric current that can be transferred through wires for long distances.

Electric generator consists of a stationary magnet that may be permanent magnet or electromagnet, An armature (a single loop of wire coil of many turns) suspended between the poles of the magnet, A pair of slip rings are connected one to each terminal of the coil and rotate with the coil in the magnetic field, Two graphite brushes each touch one of the two slip rings through which, the induced electric current flows to the external circuit (Dynamo poles).

Electric generator is used to convert the mechanical energy into electric energy, When the loop rotates with a linear velocity (v) such that its two sides AB and CD intercept magnetic flux of density (B) and if the angle between the direction of the linear velocity and the flux lines is θ, then the induced emf generated in each of the two sides is emf = Blv sin θ.

Where: l = length of the sides AB and CD, But no induced emf is generated in any of the sides BC and AD such that they are always parallel to the direction of the magnetic field, thus emf in each turn becomes:

Where: (ω) is the angular velocity and equals (2πf), (f) is the frequency, (r) is the radius of the circle in which the coil rotates about its axis.

The instantaneous induced emf can be determined in terms of ( emf )max: 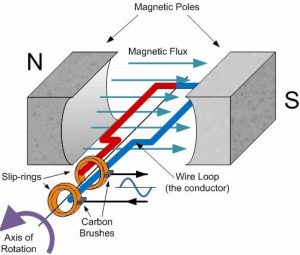 Factors affecting the instantaneous induced emf in the AC dynamo

Explaining the work of dynamo through a complete revolution :

Frequency of the home current = 50 cycle/sec

The alternating current is the electric current that changes its intensity and direction periodically with time from zero to a maximum value, then returns to zero in half cycle, then reverses its direction and increases to maximum value then to zero in the second half cycle and this is repeated each cycle.

Deduction of the average induced emf in a coil (emf)ave

Effective value of the alternating current

Also the effective value of the electromotive force:

Electric current rectification in the dynamo

Current rectification means converting the alternating current into a unidirectional current or direct current that has one direction and almost constant value, Many electrical processes, such as the production of some metals require direct current, For this purpose, an AC generator may be converted into DC generator.

Usage: preparation of some metals from their compounds by electrolysis.

In the second half of the cycle, the electric current reverses its direction in the coil, the current passes in the coil in the direction ZYXW, At the same time, brush F1 will be in contact with the half (2), while F2 will be in contact with the half (1), the two halves of the commutator reverse their position relative to the two brushes, In such a case, the current in the external circuit passes from F1 to F2, which is the same direction as that in the first half of the cycle.

Continuing the rotation, the brush F1 acts as a positive pole, while F2 acts as the negative pole of the dynamo, Accordingly, the current and the induced emf in the external circuit will be always in one direction but its value changes from zero up to a maximum value, then decreases again to zero during each half cycle of the coil rotation, but it is always in one direction.

To obtain a uni-directional current of approximately constant value

Structure: Many coils separated by small angles are used, A hollow metallic cylinder is used which is split into a number of segments, double the number of coils, thus, the current in the external circuit is almost constant, this is the way to obtain a DC generator.