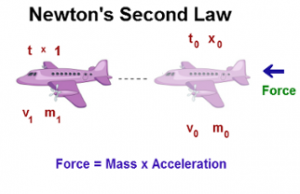 There are two forms of Newton’s Second Law :

The resultant force affecting an object equals to the rate of change in the object’s momentum ( motion amount ) .

From Newton’s Second Law : The change in momentum depends on the time of this change and the acting force :

The other form of Newton’s Second Law of motion :

When a resultant force acts on a car during an interval of time , its velocity increases and acquires an acceleration .

Acceleration is directly proportional to the resultant force acting on the object at constant mass ( a ∝ F ) .

Acceleration is inversely proportional to the object mass at constant force ( a ∝ 1 / m ) .

The unit of measuring force is kg.m/s² which is equivalent to the Newton ( N ) and its dimensions are MLT−2 .

The Newton : It is the force that when acts on an object of mass 1 kg accelerates it at 1 m/s² in the same direction .

When the resultant force acts on a body = 20 N , It means that it is the product of the mass of the body and its acceleration = 20 kg.m/s² .

Factors that affect the acting force :

Factors that affect the acceleration :

If we compare between two resultant forces which affect on two different objects , they move with uniform acceleration : F1 ÷ F2 = ( m1 a1 ÷ m2 a2 ) .

If the object mass decreases to half and the acquired acceleration increases to double , the resultant force remains unchanged .

If the object mass decreases to half and the resultant force increases to double , the acquired acceleration increases to four times .

If there is a friction force ( Ffriction ) between the surface and the body , the body moves due to acting force ( Facting ) :

Negative sign indicates that friction force acts in opposite direction .

In case of more than one force acts on the body , then

When the object acts on another object by a force , the second object reacts with an equal force on the first object in a direction opposite to that of the action or for every action there is a reaction equal in the magnitude and opposite in the direction .

This law is related to two mutual forces between two different bodies , If we considered the first force as an action , the second force is considered as a reaction in the opposite direction .

The mathematical formula that expresses the law : F1 = − F2 , ( The negative sign indicates that the two forces act in opposite direction ) .

Launching a rocket is based on Newton’s Third Law of motion , A huge amount of burning gases rush down the rocket to generate a reaction pushing the rocket upwards , When a bullet is fired ( action ) , the rifle recoils backwards ( reaction ) , because of this a soldier should mount the rifle back firmly to his shoulder .