To avoid the dangers of exceeding prescribed speeds and to save souls , Traffic instructions should be followed such as leaving an appropriate distance between vehicles to allow the driver to stop safely in case of emergency , Obviously, More spacing between vehicles is required as Speed of cars gets higher , The road is wet or has oil stains , Trucks should leave larger spacing than small cars .

If two objects of different masses ( a book and a sheet of paper ) are dropped at the same time from a high point , the two objects start motion from rest (  vi = 0 ) falling under the effect of two forces :

The gravitational pull ( their weights ) and the air resistance , Since collision of the object with air molecules affects the velocity of falling of light objects ( the paper sheet ) more than that of heavier objects ( the book ) , we find that the book reaches the ground first .

If the air resistance is neglected , The two objects fall under the effect of their weights only and acquire a uniform acceleration that acts to increase the speed of falling gradually till it reaches its maximum value when touching the ground , this acceleration is called acceleration due to gravity or free fall acceleration . 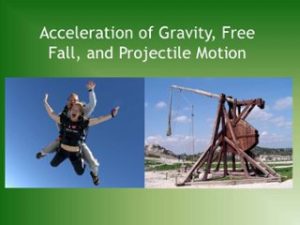 Galileo proved that Falling objects of different masses , when neglecting air resistance reach the ground at the same time , He put an end for Aristotle’s idea that implied , ” Heavy objects would reach the ground in a shorter time than that taken by lighter objects ” , He proved this by dropping two objects of different masses down Tower of Pisa in Italy .

It is the uniform acceleration by which objects move during free fall towards the ground , This acceleration varies slightly from one position to another depending on its distance from the Earth’s center , Its average value equals 9.8 m / s² and for simplicity , it can be considered 10 m / s² .

When free fall acceleration of an object = 9.8 m / s² , This means that the velocity of the object that falls freely increases by 9.8 m / s every second .

When an object falls freely downwards , The velocity of object increases gradually till it reaches its maximum value when reaching the ground , Its initial velocity vi = 0 .

The free fall acceleration ( g ) is positive ( increasing velocity ) since the direction of object motion is in the same direction of Earth’s gravity .

When an object is projected vertically upwards , The velocity of object decreases gradually till it vanishes at the maximum height , Its final velocity vf = 0 .

When a ball is projected upwards at an angle ( θ ) to the horizontal , It moves in a curved path , we can resolve velocity in two dimensions , Horizontal ( x ) and vertical ( y ) as shown :

In the horizontal dimension ( x ) , The ball velocity is uniform ( vix ) ( neglecting any friction ) :

The velocity of the projectile at any instant is given by Pythagoras’ relation :

Finding the time of reaching the maximum height ( t ) :

Substituting by vfy = 0 in the first equation of motion , we find :

Time taken till returning back to the plane of projection ( flight time ) :

Finding the maximum height reached by the projectile ( h ) :

Substituting by vfy = 0 in the third equation of motion , we find :

Equations of motion are not applied in x – axis :

Equations of motion are not applied in y – axis :