It is the change in the position of an object relative to fixed point as time passes , The motion of an object can be represented by taking a series of successive photos in equal intervals of time , The pattern that shows the sequence of motion is called the motion diagram .

Motion can be classified into two main types which are Translational motion and periodic motion and the simplest type of motion is the motion in a straight line .

It is the motion which is characterized by having a starting point and an end point , Such as Motion in a straight line ( train motion ) , Projectile motion and Transportation motion .

It is the motion that repeats itself over equal intervals of time , Such as Motion in a circle , Vibrational motion ( pendulum , tuning fork ) and Motion of the Moon around the Earth . 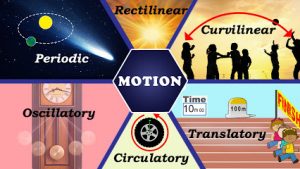 If a car moves to cover a distance in a certain direction ( displacement ) Δ d in time interval Δ t  , the car velocity ( v ) can be found by the relation :

When a car moves at velocity of 40 m/s , This means that this car covers a displacement of 40 m every 1 second or the rate of change of the car displacement is 40 m / s .

Speed is the distance moved by the object per unit time , It is a scalar quantity , It is defined by its magnitude only and it is always positive , Example : A car moves at speed 90 km / h .

Velocity is the displacement of the object per unit time , It is a vector quantity , It is defined by its magnitude and direction , It is positive in a certain direction and negative in the opposite direction , Example : A car moves at velocity 80 km / h to East .

Uniform velocity is the velocity in which the object moves through equal displacements in equal intervals of time , The object moves at constant magnitude in one direction ( in a straight line ) .

Non-uniform velocity is the velocity in which the object moves through unequal displacements in equal intervals of time , Velocity may change its magnitude or direction .

When the object moves at non-uniform velocity , its velocity changes from one instant to another , So , we can find :

It is the velocity of the object at a given instant , The instantaneous velocity of an object is given by the slope the tangent drawn to the curve at the point corresponding to that instant .

The average velocity differs from the average speed where :

Average velocity is a vector quantity , Average speed is a scalar quantity .