When measuring a physical quantity such as Temperature ( The magnitude of temperature say , 27 ° C describes temperature fully ) , Velocity ( A value of 20 km/h does not describe fully the velocity of a car such that the direction of the car motion should be defined ) . 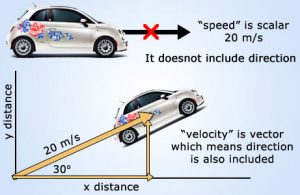 Displacement is the length of the straight line segment in a given direction between the starting point and the end point , Displacement is a vector quantity that can be fully defined by its magnitude and direction .

If a rock is pulled by two ropes with two forces of 30 N and 40 N having an angle 90° between them , We notice that the rock is moved a certain distance in a direction different than those of the two forces ( during a certain time ) .

If the two ropes are replaced by one rope and pulled by a force of 50 N , We notice that the rock is moved through the same distance in the same direction when it is affected by the two forces during the same time .

There are two ways to add two vectors by drawing a triangle and by drawing a parallelogram in which A and B are adjacent sides , Thus , the diagonal represents their resultant .

Find the magnitude of the resultant force using Pythagoras’ theorem for the right angled triangle ( AC² = AB² + BC² ) .

We can find the angle ( θ ) by the relation

Resolution of a vector

Resolution of a vector is the reverse operation for getting the resultant of some vectors where a force can be resolved into two perpendicular forces along dimensions ( x , y ) , Thus :

There are different forms of finding the product of two vectors :

The dot product of two vectors A and B is expressed as follows :

The cross product of two vectors A and B is expressed as follows :

The operation of the electric motor depends on the presence of two vectors which are electric field and magnetic field , while they cause the rotation of the motor coil in a direction perpendicular to the plane of them both .

It is used to define the direction of the vector product C of two vectors A and B .

Move the fingers of the right hand from the first vector towards the second vector through the smaller angle between them θ , the thumb then points to the direction of their vector product .