The object moves at an acceleration when affected by a force , The force is an external influence that affects the objects to change its state of motion or direction , Force is measured using the spring balance in Newtons ( N ) .

Such as the force exerted by your muscles helps to pull or push things , The force of the car engine helps the car to start motion and the force of brakes acts to stop the moving car .

Appreciation to Galileo and Newton for their contribution in formulating a reliable theory of motion by the end of the seventeenth century where they explored and explained motion and its causes . 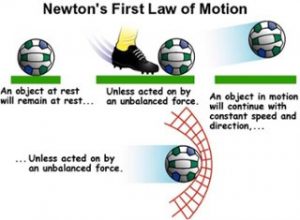 When a book is placed on a table , It remains stationary in position unless somebody acts to affect it and change its state .

When an object is pushed on the floor , It rolls for a certain distance , then slows down till it stops by the effect of frictional forces between the object and the floor that resist rolling ( Friction is an external force that acts to change the object state ) .

If these forces do not exist , the object would keep moving at a uniform velocity and would not stop .

The symbol ( ∑ ) is pronounced sigma and means ” resultant ” , If a number of forces act on an object , they may cancel the effect of each other and their resultant equals zero , Thus , acceleration ( a ) = 0 and no change happens in object velocity either being static or dynamic .

Newton’s First Law is known as the Law of Inertia since the object can not change its state of rest or motion by itself .

Inertia is the tendency of an object to keep either its state of rest or state of motion at its original velocity uniformly in a straight line , or it is the property of objects to resist the change of its static or dynamic state .

Inertia can be clarified by the following applications

The static object tends to keep its state of rest , such as the passengers in a vehicle tend to fall backwards when the vehicle suddenly moves forwards , Fall of a coin into a cup when the card is removed rapidly .

The moving object tends to keep its state of motion , Such as the  passengers in a vehicle tend to fall forwards when the vehicle crashes against a barrier , The continuity of fan motion when the electric current is turned off .

Seat belt should be fastened on driving to stop inertia during sudden stop and protect passenger from being hurt .

Space rockets do not consume fuel to keep moving when being out from the Earth’s gravity because inertia keeps them moving at a uniform velocity in a straight line .

Stopping objects which are moving under the effect of inertia depends on Mass and velocity ,The velocity and mass are related to a physical quantity known as Momentum ( p ) .

Factors that affects the momentum

Newton’s Second Law of motion , Factors that affect the acting force & the acceleration