There are many accompanied forces to the motion of objects, such as forces that originate due to motion (Forces of inertia and Friction forces), and Forces cause motion (Forces inside living systems).

When forces act on objects, which are at rest or moving at a constant speed, these objects resist changes in their motion because of their inertia. Inertia is a property of an object that has to resist the change of its state of rest or motion at a regular speed in a straight line unless an external force acted on it.

When you carry small plastic cubes on your plan and stretch your arm forward, then walk forward fast and suddenly stop at once. you will observe that the plastic cubes move forward and fall on the ground. The cubes resist the sudden stopping of the palm of your hand due to inertia, so they continue in the state of motion and fall on the ground. (The cubes move at the same speed of the person who carries them). so, Force of inertia makes objects resist the change of their motion.

When you place a piece of construction paper on the top of a glass cup and put a coin on it and use your forefinger to deliver a quick hit to the paper. you will notice that the coin falls inside the cup, The coin resists the sudden movement of the paper due to inertia, so it remains static and it falls in the cup. So, Force of inertia makes objects resist the change of their rest state.

Examples indicating inertia in our life

The passengers and the driver in a moving bus or car (vehicle) are rushed forward when the bus or car stops suddenly due to inertia for the passengers and driver, it makes them resist the sudden stopping of the vehicle to maintain the state of motion, so they rush (force) forward.

The passengers and the driver in a static bus or car (vehicle) are rushed back when the vehicle starts moving forward after it was at rest due to inertia for the passengers and driver, it makes them resist the sudden motion of the vehicle to maintain the state of rest, so they rush back.

Policemen advise drivers to use safety belts in cars and planes because safety belts work on stopping the forces of inertia to prevent the driver from being injured when a sudden change in motion occurs. The fan is going to turn after the electric current goes off due to inertia, as its arms try to maintain its state of motion. 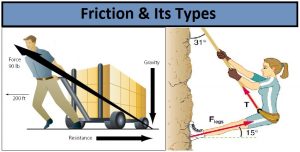 Once you use the brakes of a moving bicycle, its speed decreases gradually until it stops because the friction between the tyre of the bicycle and the brakes generates a friction force against the motion of the bicycle which leads to resist it. Cars that travel on snow have to carry chains that fit around the tyres to increase friction to control the motion.

When you drive a car in city traffic for some time, the brakes become hot because some mechanical energy is transferred into heat energy due to friction. You are able to run over grass much faster than you run over a ground covered with ice because friction with grass is more than friction with ice, so, the motion is more controlled.

Examples of forces inside living systems

Heart muscle contraction and relaxation helps the heart to pump blood all over the body organs and vice versa, [ This is indicated by heart pulses during the movement of blood inside blood vessels].

Blood is pumped all over the body organs due to heart muscle contraction and relaxation. The role of the heart in raising blood from the bottom (lower parts) to top is similar to the role of water pump in raising water from canals and groundwater wells against the Earth’s gravity.

Liquids are transported through pores and the walls of cells from the lower concentration to the higher one. Rising of water and salts from the soil to plant [ from root to stem, then leaves ] against Earth’s gravity force. The concentration and relaxation of muscles help the body organs movement.