The friction between the solid objects and the air

When a solid object moves in the air, a friction force arises between the object and the air, This type of friction is called the air resistance and it acts in the opposite direction of the body movement, So, it resists its movement.

The greatest velocity an object reaches is called the terminal velocity, and in the vacuum, All the objects fall at the same rate.

When the air resistance affecting a moving car equals the force that results from the increase in the speed of the car, the car moves with a constant velocity. 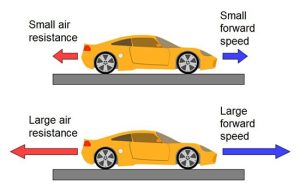 The factors affecting the friction between two solid objects