Magnetism is the ability of the magnet to attract magnetic materials , 2000 years ago , the ancient Greeks found a type of black rocks located in an area named Magnesia , This type of rocks has an attraction force to any material made of iron , So , scientists called this black rock ” natural magnet ” and its attraction force ” magnetism ” .

Magnets are classified into two types which are natural magnet and artificial magnet , Natural magnet is a black rock , It is one of the iron ores which is known as Magnetite . 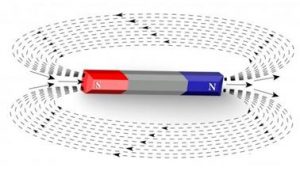 Making the magnetic compass is one of the uses of magnet in our daily life , The compass is a needle magnet that takes a fixed direction which is north-south direction .

Long time ago , the Chinese used the magnetic rock that spins freely taking a fixed direction which is north-south direction , A Chinese major general depends on this idea in leading his army through dense foggy areas .

In 1600 , the English scientist William Gelbert took the idea of magnetic rock and made a small magnetized needle that is light for spinning freely , This magnetized needle was the basic idea in making the compass .

Electromagnetic induction, Faraday’s law and self induction coefficient in a coil