Automated metro systems can enhance safety and customer service on metro networks that have been specifically designed to host driverless trains, safety records are excellent, human controllers are still very much part of safety protocol in a driverless system.

Driverless metros break the connection between frequency and labour costs, Increasing the rate of arriving trains, or running services outside the usual hours, there are no extra costs in human labour, metros in smaller cities don’t have access to massive budgets.

Automated metro trains are more energy-efficient and always run on schedule, The energy consumption by these trains can be cut by 30% depending on the degree of automation, these trains will carry more passengers in each coach as compared to the driver-driven metro trains. 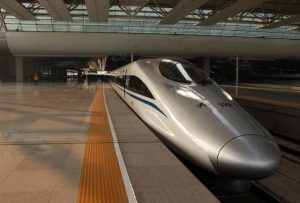 Types of metro automation are The Driver Controlled Mode, The Partially Automatic Mode and Driverless Mode.

It is a fully automatic driverless train, the control is done through a Communication-based train control where a trackside computer is used to monitor the train running on the assigned line and convey this information to the centralized computer, and the train can be controlled by the automatic train control system.

Automatic Driverless Train has a rectangular body which holds all the other robotic components such as the control circuit, the door etc., A sliding door prototype, A couple of IR LED and photodiode arrangement and control circuitry using a Microcontroller.

Door control system & Automatic platform sensing have of an IR LED and a photodiode system, When the sensor senses the coming of the station, the motor driver automatically drives the motor such that the train comes to the halt and the door is opened when the person is sensed, The train has a passenger counter system that counts the number of passengers entering the train, when the count reaches a certain limit the door is closed automatically and the train can move after a certain time limit.

The IR LED-photodiodes will be placed parallel to each other and as the photodiode doesn’t get the light pulses, it doesn’t conduct, so, the microcontroller will get a high signal as the train moves, When the train approaches the station, the IR light from the IR LED gets reflected by any object (suppose the station signal) and the reflected light falls on the photodiode, causing it to conduct and an interrupt low signal is given to the microcontroller through the transistor.

The passenger counter system consists of an IR LED-Photodiode arrangement – one at the door and another a little distance away, When the person enters the door, there is an interrupt between the IR LED and the photodiode and accordingly the corresponding transistor sends a logic high signal to the microcontroller.

As the person leaves the area and goes inside interrupting second IR LED-Photodiode arrangement, the 1st IR LED-Photodiode arrangement comes back to its normal operation and a low signal is sent from the transistor to the microcontroller, This transition from high to low of the microcontroller pin causes an increase in the number display of the 7 segment display programmatically.

When the count reaches a maximum, the microcontroller is programmed so as to trigger a buzzer alarm, Similarly, when an interrupt is sensed between the 2nd IRLED-Photodiode arrangements, the transition from high to low signal of the microcontroller causes a decrease in the number count of the second 7 segment display.

Some passengers worried about the safety of trains controlled automatically and without direct human supervision, Implement driverless operation on a new or existing metro system requires high costs in signalling and control technologies, additional communication and monitoring systems, the capital costs are set against improvements in the quality of service delivered.

Unattended train operation (UTO) requires a higher cost of implementation as it involves automation at the levels of rolling stock, signalling and platform, Secondly, maintenance costs of the UTO system are higher as an additional platform and track protection systems must be installed and maintained, the investment of UTO infrastructure and driverless vehicles is high.

The investment required to prevent incursions onto the infrastructure and retain compatibility with mainline trains is likely to be very high by comparison with these other systems, this appears to be the largest single obstacle to driverless operation on the Metro, and suggests that it is not currently a particularly promising application for driverless trains, Automatic train control system is expensive, it may cause disturbance, and it may suffer from loss of control.