The motion sensors are used with other devices such as the security cameras , the alarms or lightings , The most common usages of the motion sensor is the alarm system , These alarm systems are installed in the individual properties & the commercial buildings to detect motion of unwanted trespassers .

When the burglar walks into the detection range of the sensor , It automatically starts the alarm , Motion detectors are used together with the security cameras , There are more advanced motion sensors that are used in many new technologies such as gaming consoles , the smartphones , the robotics and others .

Infrared sensors are used in the open spaces , though less suited for working in narrow corridors or detecting the windows breaking , In these cases it’s recommended to use the ultrasonic or microwave detectors . 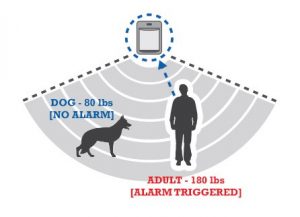 Automatic doors with a motion sensor

The motion detectors are used together with the lights and lighting systems both for the security and safety purposes , These lights can be used for security purposes to uncover the burglar from the dark and scare him away from your property .

From safety aspect , these lights help to illuminate the dark area at night , so that the person can safely walk to desired place and at the same time motion detector helps to save the energy by turning the light on only .

The occupancy sensors are used in the indoor places to detect if there are movements in the room and turn the light on or off accordingly , These sensors help to save both individuals and companies significant amount of money on the electric bills each year .

The active infrared sensors ( AIR sensors ) establish the beam of infrared light using an infrared light source or sources as the transmitters and photo detectors for the receivers .

The active infrared detectors emit the constant electrical signal which uses infrared light ( heat ) beams that connect to the light detector , If the infrared beams are interrupted , your detector sounds the alarm .

The active sensors may use infrared energy , radar waves or the other methods to sweep the area they cover to detect the movement , When it is activated , The active sensor sends out pulses of energy .

The active sensors use technique which sends the signals or the waves across the room or the other places , where the sensor is installed and monitors the changes in wave response time .

The passive infrared sensors (PIR sensor) is the electronic sensor that measures infrared (IR) light radiating from the objects in its field of view , PIR sensors are more complicated than the other sensors because there are multiple variables that can affect the sensors input and output .

The increase in the infrared energy tells the sensor that someone or something is moving through the area , All the objects with the temperature above absolute zero emit the heat energy in the form of radiation .

The passive infrared sensors react with the human movements by detecting the thermal radiation that comes from the person , This radiation is invisible to the human eye as it radiates at infrared wavelengths and they come in several arrangements for a wide assortment of applications.

The users can calibrate these sensors to trigger only at certain levels of infrared heat to prevent them from going off in the presence of birds or small animals , Some models have a limited viewing angle and because of this they can switch on the lights only when the person is in the right detection area .

The modern PIR detectors are equipped with the light sensor so they don’t switch on in the daytime , helping to save the electricity , The motion sensors can start the operation of the cameras , the alarms , the sirens and other necessary devices when someone enters your premises.

The motion sensors are using not Infrared only but the combination of technologies can result in more reliable detection , Combined motion sensors has fewer false positives , They are resistant to the outdoor exposure and the other interference and they react instantly even to the smallest movement of a person .

They are based on the principle that the sound has the reasonably constant velocity , The time it takes for the ultrasonic sensor’s beam to strike the target and return is directly proportionate to how far away the object is .

So , ultrasonic sensors are used in the measurement of distances , They are similar to AIR sensors in how they work , but they detect ultrasound waves, When the object appears in the detection zone , the length and frequency of the waves change that leads to the device switching on .

The microwave sensors are similar to ultrasonic sensors in that they fill an area of detection , The microwave motion sensors emit the microwave energy to detect the movement , rather than ultrasound waves .

Radar is a well-known object-detection system which can use microwaves to determine the range , the angle or velocity of objects , The receiver detects microwaves emitted from the transmitter along with any reflected microwaves or reduction in beam intensity .

The shift in the frequency of the reflected energy or reduction of the level of received energy will indicate the movement or a potential intruder , To reduce the likelihood of false alarms , microwave detector is combined with a passive infrared detector .

Motion Sensors ( Motion detection ) features , advantages and How does the motion detector work ?