What are the advantages and disadvantages of watching TV?

Television is one of the most important inventions in transforming information, It can be a great source of entertainment, knowledge, and communication, A lot of information is available to many people with the use of television, You can know information on politics, science, history, geography, culture in a way that has never before been possible.

What is a Television?

Television is a communication tool used to relay TV signals with the help of TV frequencies, The appropriate antennas are designed to broadcast and receive TV signals having a bandwidth of about 6 MHz, TV signal consists of picture and audio information. Two main systems in the TV system are the transmitter and receiver, TV remote control helps in selecting the appropriate channel as per user intention or desire.

Television, sometimes shortened to TV, helps to upgrade knowledge, It helps you to know the latest trend in the world, It is nowadays one of the widely used communication media, useful information can be reached to millions of people directly by TV, and you can get a whole look all over the world, and many people love television so much that they make their careers out of it.

We can learn several languages and lots of other useful things by watching television, some shows and channels offer educational programs that can increase our knowledge and make us more aware of the world around us, It can connect us to the world and beyond. 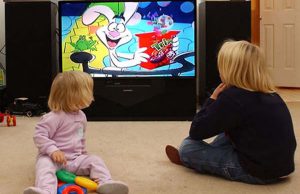 Advantages and disadvantages of watching TV

Anybody can watch television simply by sitting at home, News, movies, family shows, sports, music as well as other useful shows and channels can be seen on TV, It plays an important role in educating people about corruption, and they can increase their knowledge about the social & political world.

The kids can enjoy TV by watching cartoons channels as well as some channels such as Discovery Channel to gain knowledge, television can be a great educator for children, there are various channels in different languages, so, you can see the channel or the shows of your choice in your regional language.

Television can educate and inform independently of the government in most parts of the world, People can learn more and more about the world by watching television, It keeps us updated, and we can watch live news as well as live shows or live sports easily with the help of television.

Television is a source of entertainment that is affordable, Today, movies, drama, comedy & music are all available at home, In your free time, watching TV is good which may freshen your mood by watching the show you like as it is a good and effective way of advertising product or information.

Television is the most effective medium to deliver information to large numbers of people very quickly, The news in one part of the world can be seen within minutes or even seconds in any other part of the world.

In this busy and expensive life, television is an easy and cheap source of entertainment, we can watch the international news, and we are kept informed and up-to-date with breaking news around the world, Television can also be a good way to help people learn a different language.

Television gives us easy access to all kinds of information such as cooking channels that offer new recipes and methods, Home improvement shows that introduce us to many money-saving and financial advisers give advice for managing finances and investing money.

TV has become a luxury tool due to the availability of costly LCD, Plasma, and LED TVs, TV can be used by government agencies to relay vital information related to disasters, and weather forecasts, This helps in spreading immediate awareness among people, cheap TV sets are available in both rural as well as urban areas almost in each and every households.

TV helps you feel less lonely, Television can expand your mind, Some shows allow you to travel and teach you about different people, cultures, ideas, and places you might never encounter in real life. Television makes you feel like part of a group and let you participate in a shared subculture, Gathering around the television gives families, friends, and strangers something to bond over, There may be certain health benefits to watching television when a certain show makes you laugh, TV can connect you to the world and beyond. 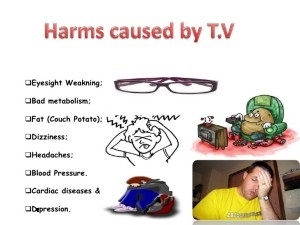 The children sometimes watch scary movies which affect their mental conditions, they sit very close to the TV which is not good for the eyesight of the children, The students do not pay attention to their studies while watching TV which affects their education of them.

The children can be exposed to programming that is not appropriate for their ages, Adult themes of sex and violence are far too easily accessed and they destroy the innocence of children, Some companies use the TV for sex TV films and programs which cause a lot of social problems.

There are thousands of shows or movies shown on TV, Hence some people waste more time every day while watching TV, if people spend much more time watching TV then they may become lazy, Sometimes distracted from work by watching TV.

Television often participates in risky, violent, or unwise behaviors and reinforces rigid gender roles and racial stereotypes, It can portray idealized lives & body types that negatively impact viewers’ self-esteem, Because of the violent news such as killings and bombings, we may develop an inflated sense of danger, the content that contains sex or violence can cause a belief that such behavior is normal and acceptable.

Television is an easy & cheap source of entertainment, By watching international news, we are kept informed and up-to-date with breaking news around the world, but more use of television may increase the electricity bill, The advertisers often target the kids, the children see about 40,000 ads per year on television alone, including ads for unhealthy snack foods and alcohol.

Violence, Sex & crime are depicted on television, They come with negative effects on impressionable children (and adults!), Children who see violent acts are more likely to display aggressive or violent behavior, Viewers of the TV sometimes imitate violent, criminal, sexual, or other risky behavior they see on television and end up in trouble, in jail, or in a hospital as a result.

Watching too much television can contribute to obesity, Excessive TV watching can contribute to sleep difficulties, behavior problems, lower grades & other health issues, Television may be addictive, up to 12% percent of TV watchers feel unhappy about the amount of TV they watch, consider themselves addicts, yet feel incapable of stopping themselves.

Television makes us antisocial, taking the place of family & friends, viewers can spend hours just flipping channels trying to find something worthwhile, Most programs offer a skewed or biased view of events, They are too short and too interrupted by advertisements to delve very deeply into a topic, Many reality shows depict deplorable characters doing silly, useless things.