There are some phenomena related to the static electricity as the vision of the light in the sky which is called the lightning,  standing of your hair during combing it by a plastic comb, and hearing a sound when you put off your clothes. 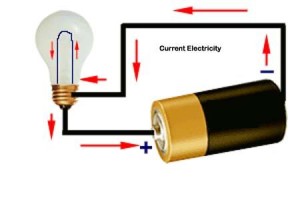 To obtain the electric current or the dynamic electricity, we need to form an electric circuit which is composed of a battery, a lamp, the connecting wires and the electric switch (the key).

Ohm’s Law for the closed circuit, Relation between emf (VB) of an electric cell & voltage across its poles